Could CRISPR Gene-Editing Technology Be an Answer to Chronic Pain?

Gene editing has shown great promise as a non-heritable way to treat a wide range of conditions, including many genetic diseases and more recently, even COVID-19. But could a version of the CRISPR gene-editing tool also help deliver long-lasting pain relief without the risk of addiction associated with prescription opioid drugs?

In work recently published in the journal Science Translational Medicine, researchers demonstrated in mice that a modified version of the CRISPR system can be used to “turn off” a gene in critical neurons to block the transmission of pain signals [1]. While much more study is needed and the approach is still far from being tested in people, the findings suggest that this new CRISPR-based strategy could form the basis for a whole new way to manage chronic pain.

This novel approach to treating chronic pain occurred to Ana Moreno, the study’s first author, when she was a Ph.D. student in the NIH-supported lab of Prashant Mali, University of California, San Diego. Mali had been studying a wide range of novel gene- and cell-based therapeutics. While reading up on both, Moreno landed on a paper about a mutation in a gene that encodes a pain-enhancing protein in spinal neurons called NaV1.7.

Moreno read that kids born with a loss-of-function mutation in this gene have a rare condition known as congenital insensitivity to pain (CIP). They literally don’t sense and respond to pain. Although these children often fail to recognize serious injuries because of the absence of pain to alert them, they have no other noticeable physical effects of the condition.

For Moreno, something clicked. What if it were possible to engineer a new kind of treatment—one designed to turn this gene down or fully off and stop people from feeling chronic pain?

Moreno also had an idea about how to do it. She’d been working on repressing or “turning off” genes using a version of CRISPR known as “dead” Cas9 [2]. In CRISPR systems designed to edit DNA, the Cas9 enzyme is often likened to a pair of scissors. Its job is to cut DNA in just the right spot with the help of an RNA guide. However, CRISPR-dead Cas9 no longer has any ability to cut DNA. It simply sticks to its gene target and blocks its expression. Another advantage is that the system won’t lead to any permanent DNA changes, since any treatment based on CRISPR-dead Cas9 might be safely reversed.

After establishing that the technique worked in cells, Moreno and colleagues moved to studies of laboratory mice. They injected viral vectors carrying the CRISPR treatment into mice with different types of chronic pain, including inflammatory and chemotherapy-induced pain.

Moreno and colleagues determined that all the mice showed evidence of durable pain relief. Remarkably, the treatment also lasted for three months or more and, importantly, without any signs of side effects. The researchers are also exploring another approach to do the same thing using a different set of editing tools called zinc finger nucleases (ZFNs).

The researchers say that one of these approaches might one day work for people with a large number of chronic pain conditions that involve transmission of the pain signal through NaV1.7. That includes diabetic polyneuropathy, sciatica, and osteoarthritis. It also could provide relief for patients undergoing chemotherapy, along with those suffering from many other conditions. Moreno and Mali have co-founded the spinoff company Navega Therapeutics, San Diego, CA, to work on the preclinical steps necessary to help move their approach closer to the clinic.

Chronic pain is a devastating public health problem. While opioids are effective for acute pain, they can do more harm than good for many chronic pain conditions, and they are responsible for a nationwide crisis of addiction and drug overdose deaths [3]. We cannot solve any of these problems without finding new ways to treat chronic pain. As we look to the future, it’s hopeful that innovative new therapeutics such as this gene-editing system could one day help to bring much needed relief. 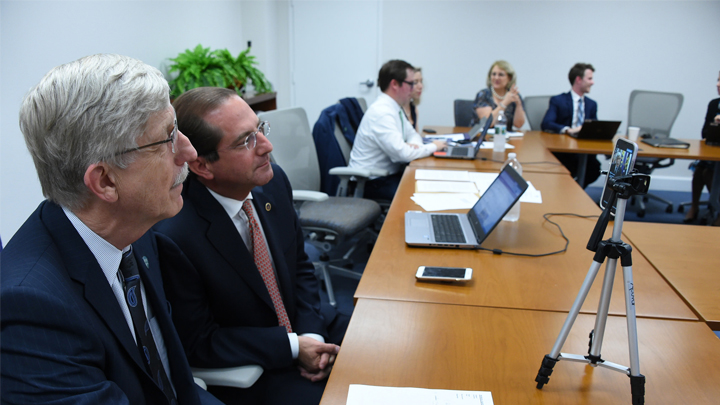 Managing Chronic Pain: Opioids Are Often Not the Answer

The term “silent epidemic” sometimes gets overused in medicine. But, for prescription opioid drugs, the term fits disturbingly well. In 2012, more than 259 million prescriptions were written in the United States for Vicodin, OxyContin, and other opioid painkillers. That equals one bottle of pain pills for every U.S. adult. And here’s an even more distressing statistic: in 2011, overdoses of prescription painkillers, most unintentional, claimed the lives about 17,000 Americans—46 people a day [1].

The issue isn’t whether opioid painkillers have a role in managing chronic pain, such as that caused by cancer or severe injuries. They do. What’s been lacking is an unbiased review of the scientific literature to examine evidence on the safety of long-term prescription opioid use and the impact of such use on patients’ pain, function, and quality of life. The NIH Office of Disease Prevention (ODP) recently convened an independent panel to conduct such a review, and what it found is eye-opening. People with chronic pain have often been lumped into a single category and treated with generalized approaches, even though very little scientific evidence exists to support this practice.