It usually takes more than a decade to develop a safe, effective anti-viral therapy. But, when it comes to coronavirus disease 2019 (COVID-19), we don’t have that kind of time. One way to speed the process may be to put some old drugs to work against this new disease threat. This is generally referred to as “drug repurposing.”

NIH has been doing everything possible to encourage screens of existing drugs that have been shown safe for human use. In a recent NIH-funded study in the journal Nature, researchers screened a chemical “library” that contained nearly 12,000 existing drug compounds for their potential activity against SARS-CoV-2, the novel coronavirus that causes COVID-19 [1]. The results? In tests in both non-human primate and human cell lines grown in laboratory conditions, 21 of these existing drugs showed potential for repurposing to thwart the novel coronavirus—13 of them at doses that likely could be safely given to people. The majority of these drugs have been tested in clinical trials for use in HIV, autoimmune diseases, osteoporosis, and other conditions.

In collaboration with Yuen Kwok-Yung’s team at the University of Hong Kong, the researchers first developed a high-throughput method that enabled them to screen rapidly each of the 11,987 drug compounds in the ReFRAME library for their potential to block SARS-CoV-2 in cells grown in the lab. The first round of testing narrowed the list of possible COVID-19 drugs to about 300. Next, using lower concentrations of the drugs in cells exposed to a second strain of SARS-CoV-2, they further narrowed the list to 100 compounds that could reliably limit growth of the coronavirus by at least 40 percent.

Generally speaking, an effective anti-viral drug is expected to show greater activity as its concentration is increased. So, Chanda’s team then tested those 100 drugs for evidence of such a dose-response relationship. Twenty-one of them passed this test. This group included remdesivir, a drug originally developed for Ebola virus disease and recently authorized by the U.S. Food and Drug Administration (FDA) for emergency use in the treatment of COVID-19. Remdesivir could now be considered a positive control.

These findings raised another intriguing question: Could any of the other drugs with a dose-response relationship work well in combination with remdesivir to block SARS-CoV-2 infection? Indeed, the researchers found that four of them could.

Further study showed that some of the most promising drugs on the list reduced the number of SARS-CoV-2 infected cells by 65 to 85 percent. The most potent of these was apilimod, a drug that has been evaluated in clinical trials for treating Crohn’s disease, rheumatoid arthritis, and other autoimmune conditions. Apilimod is now being evaluated in the clinic for its ability to prevent the progression of COVID-19. Another potential antiviral to emerge from the study is clofazimine, a 70-year old FDA-approved drug that is on the World Health Organization’s list of essential medicines for the treatment of leprosy.

Overall, the findings suggest that there may be quite a few existing drugs and/or experimental drugs fairly far along in the development pipeline that have potential to be repurposed for treating COVID-19. What’s more, some of them might also work well in combination with remdesivir, or perhaps other drugs, as treatment “cocktails,” such as those used to successfully treat HIV and hepatitis C.

This is just one of a wide variety of drug screening efforts that are underway, using different libraries and different assays to detect activity against SARS-CoV-2. The NIH’s National Center for Advancing Translational Sciences has established an open data portal to collect all of these data as quickly and openly as possible. As NIH continues its efforts to use the power of science to end the COVID-19 pandemic, it is critically important that we explore as many avenues as possible for developing diagnostics, treatments, and vaccines.

There’s no doubt that exercise is good for us—strengthening our muscles, helping us maintain a healthy weight, maybe even boosting our moods and memories. There’s also been intriguing evidence that exercise may help build strong bones.

Now, an NIH-funded study is shedding light on the mechanism behind exercise’s bone-strengthening benefits [1]. The new work—which may lead to new approaches for treating osteoporosis, a disease that increases the risk of bone fracture—centers on a hormone called irisin that is secreted by muscles during exercise.

In a series of mouse experiments, the researchers found that irisin works directly on a common type of bone cell, stimulating the cells to produce a protein that encourages bones to thin. However, this chain of molecular events ultimately takes a turn for the better and reverses bone loss.

Bruce Spiegelman’s lab at the Dana-Farber Cancer Institute and Harvard University Medical School, Boston, first discovered the irisin hormone in 2012 [2]. In the years since, evidence has accumulated suggesting a connection between irisin and many of the benefits that come with regular workouts. For example, delivering low doses of irisin—sometimes called “the exercise hormone”—increase bone density and strength in mice.

But how does irisin act on bones? The answer hasn’t been at all clear. A major reason is the protein receptor on our cells that binds and responds to irisin wasn’t known.

In the new study reported in the journal Cell, Spiegelman’s team has now identified irisin’s protein receptor, called αVβ5 integrin. Those receptors are present on the surface of osteocytes, the most common cell type found in mature bone tissue.

The researchers went on to show that irisin helps osteocytes to live longer. It also leads the bone cells to begin secreting a protein called sclerostin, known for its role in preparing bones for remodeling and rebuilding by first breaking them down. Interestingly, previous studies also showed sclerostin levels increase in response to the mechanical stresses that come with exercise.

To further explore the role of irisin in mouse studies, the researchers gave the animals the hormone for six days. And indeed, after the treatment, the animals showed higher levels of sclerostin in their blood.

The findings suggest that irisin could form the basis of a new treatment for osteoporosis, a condition responsible for almost nine million fractures around the world each year. While it might seem strange that a treatment intended to strengthen bone would first encourage them to break down, this may be similar to the steps you have to follow when fixing up a house that has weakened timbers. And Spiegelman notes that there’s precedent for such a phenomenon in bone remodeling—treatment for osteoporosis, parathyroid hormone, also works by thinning bones before they are rebuilt.

That said, it’s not yet clear how best to target irisin for strengthening bone. In fact, locking in on the target could be a little complicated. The Speigelman lab found, for example, that mice prone to osteoporosis following the removal of their ovaries were paradoxically protected from weakening bones by the inability to produce irisin.

This new study fits right in with other promising NIH-funded efforts to explore the benefits of exercise. One that I’m particularly excited about is the Molecular Transducers of Physical Activity Consortium (MoTrPAC), which aims to develop a comprehensive map of the molecular changes that arise with physical activity, leading to a range of benefits for body and mind.

Indeed, the therapeutic potential for irisin doesn’t end with bone. In healthy people, irisin circulates throughout the body. In addition to being produced in muscle, its protein precursor is produced in the heart and brain.

The hormone also has been shown to transform energy-storing white fat into calorie-burning brown fat. In the new study, Spiegelman’s team confirms that this effect on fat also depends on the very same integrin receptors present in bone. So, these new findings will no doubt accelerate additional study in Speigelman’s lab and others to explore the many other benefits of irisin—and of exercise—including its potential to improve our moods, memory, and metabolism.

Snapshots of Life: Inside a Bone Remodeling Project 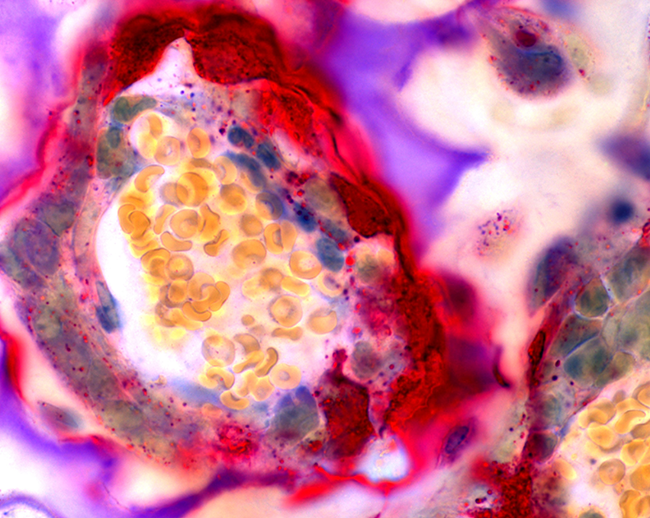 Bones are one of our body’s never-ending remodeling projects. Specialized cells, called osteoclasts, are constantly attaching to old bone and breaking it down, using acids to dissolve the calcium. In the wake of this demolition, bone-building cells, called osteoblasts, move in and deposit new minerals to patch and remodel the bone, maintaining its strength and durability.

Normally, these two types of cells strike a delicate balance between bone destruction and formation. But if this balance goes awry, it can lead to trouble. With osteoporosis, for example, bone removal exceeds formation, yielding progressively weaker bones that are prone to fracture.

1⃣ With gratitude for his leadership & dedication to #NIH I announce that Dr. John Gallin will retire from federal… https://t.co/yGrX0XiHhi 2 days ago

An #NIH-funded study found HDL #cholesterol levels may not be as useful in predicting cardiac problems among adults… https://t.co/ODPgxkKrhI 4 days ago