Creative Minds: Making a Miniature Colon in the Lab

Caption: Top down view of gut tissue monolayer grown on an engineered scaffold, which guides the cells into organized crypts structures similar to the conformation of crypts in the human colon. Areas between the circles represent the flat lumenal surface.
Credit: Nancy Allbritton, University of North Carolina, Chapel Hill

When Nancy Allbritton was a child in Marksville, LA, she designed and built her own rabbit hutches. She also once took apart an old TV set to investigate the cathode ray tube inside before turning the wooden frame that housed the TV into a bookcase, which, by the way, she still has. Allbritton’s natural curiosity for how things work later inspired her to earn advanced degrees in medicine, medical engineering, and medical physics, while also honing her skills in cell biology and analytical chemistry.

Now, Allbritton applies her wide-ranging research background to design cutting-edge technologies in her lab at the University of North Carolina, Chapel Hill. In one of her boldest challenges yet, supported by a 2015 NIH Director’s Transformative Research Award, Allbritton and a multidisciplinary team of collaborators have set out to engineer a functional model of a large intestine, or colon, on a microfabricated chip about the size of a dime. 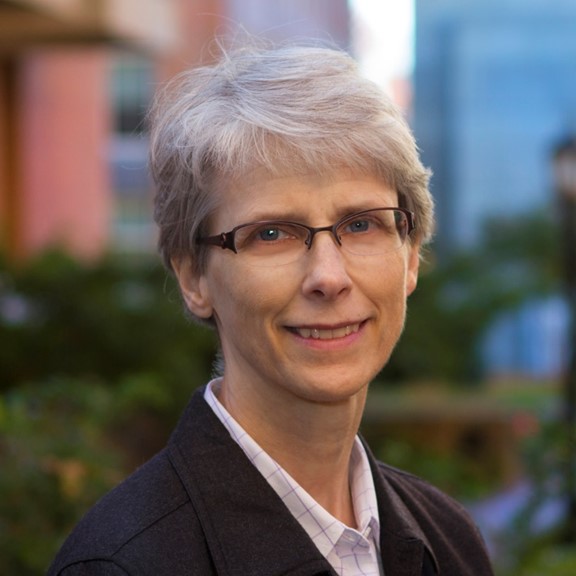 Her work is a part of NIH’s investment in developing tissue chips—miniature 3D organoids made with living cells, which the blog has highlighted several times for their great potential in basic research and drug screening. But Allbritton would like to go beyond creating an organoid that approximates certain key features of the colon. She and her colleagues want to build what she terms a simulacrum, or a miniaturized working duplicate of the colon, complete with the right intestinal cell types, chemical gradients, and microbial inhabitants.

As you might imagine, the human intestine represents an enormous bioengineering challenge. Consider that the adult human gastrointestinal tracts consists of a hollow tube, some 30 feet long, made up of a continuous layer of specialized cells. In the colon, about 5 or 6 feet long, that smooth layer of cells is pocked with small pits or “crypts” where intestinal stem cells reside. The colon is known for its rapid turnover of epithelial cells on the luminal surface, and those regenerative cells in the crypts play an important role in replenishing intestinal cells as they reach the end of their life. The colon also contains a diverse community of microbes, called the microbiome, with important roles in digestion, immunity, and more.

Allbritton says she started thinking about how “cool” it would be to reproduce a human colon about 10 years ago when she looked at the physiology of the large intestine and saw an “awesome piece of engineering.” But she couldn’t pursue the idea. It still wasn’t possible to grow intestinal stem cells or primary intestinal cells in the lab.

Soon thereafter, she moved to North Carolina, where sheer luck placed her alongside colleagues with the right expertise to complement her own. They are: Scott Bultman (microbiome), Shawn Gomez (genomics), and Scott Magness (intestinal stem cell technologies). Together, they formed a perfect team to see her vision through once the science allowed it.

To create a miniaturized version of this complex organ, Allbritton and her colleagues are beginning with an array of “hydrogels,” not unlike clear Jell-O, specifically engineered to provide the structural support and biochemical cues for developing intestinal cells. Their system is designed to allow researchers to fine-tune the environment by precisely delivering fluids and gases to their engineered tissues. That means it will be possible to recreate the steep oxygen gradient required for human cells and anaerobic microbes to live side by side, just as they do in the colon.

Once complete, their reproduction will allow an unprecedented look at the colon in health and in disease. It will become possible to regrow cells obtained in biopsy samples from individual patients, pair them with microbes, and explore the effects of particular drugs or drug combinations. Allbritton says people might one day have their own “colon-on-a-chip” as a means to explore how their body reacts to particular dietary or other environmental factors.

Their living reproductions of the colon will also have a big impact on studies of intestinal biology, interactions between pathogens and their human hosts, and regenerative medicine. In addition to all that potential for medicine and research, Allbritton is excited that rebuilding the colon requires a blend of technologies, team strategies, and the natural curiosity that she’s had since childhood.