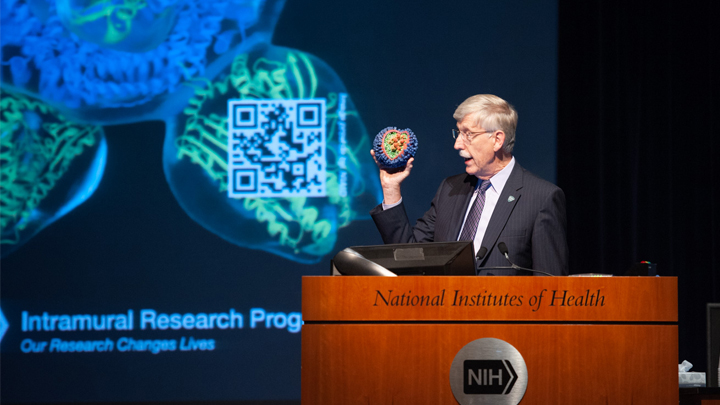 We kicked off the 32nd NIH Research Festival on September 12, 2018. This annual three-day event showcases the incredible breadth of research conducted by NIH scientists. I offered some opening remarks, holding up this 3D model of the flu virus to highlight work underway on the NIH campus to better map viral structures. Credit: NIH

A Scientist Whose Music Gives Comfort

Over the past few years, my blog has highlighted a wide range of Creative Minds from across biomedical research. But creative minds come in many forms, and, for a change of pace, I’d like to kick back this August and highlight some talented scientists who are also doing amazing things in the arts, from abstract painting to salsa dancing to rock’n’roll.

My first post introduces you to Dr. Pardis Sabeti, a computational geneticist at the Broad Institute of Massachusetts Institute of Technology (MIT) and Harvard, Cambridge, and one of Time Magazine’s 2014 People of the Year for her work to contain the last major Ebola outbreak in West Africa. When she’s not in the lab studying viruses, Sabeti is the hard-driving voice of the indie rock band Thousand Days that has been rocking Boston for more than a decade.

Without doubt, antibiotic drugs have saved hundreds of millions of lives from bacterial infections that would have otherwise been fatal. But their inappropriate use has led to the rise of antibiotic-resistant superbugs, which now infect at least 2 million Americans every year and are responsible for thousands of deaths [1]. I’ve just come from the World Economic Forum in Davos, Switzerland, where concerns about antibiotic resistance and overuse was a topic of conversation. In fact, some of the world’s biggest pharmaceutical companies issued a joint declaration at the forum, calling on governments and industry to work together to combat this growing public health threat [2].

Many people who go to the doctor suffering from respiratory symptoms expect to be given a prescription for antibiotics. Not only do such antibiotics often fail to help, they serve to fuel the development of antibiotic-resistant superbugs [3]. That’s because antibiotics are only useful in treating respiratory illnesses caused by bacteria, and have no impact on those caused by viruses (which are frequent in the wintertime). So, I’m pleased to report that a research team, partially supported by NIH, recently made progress toward a simple blood test that analyzes patterns of gene expression to determine if a patient’s respiratory symptoms likely stem from a bacterial infection, viral infection, or no infection at all.

In contrast to standard tests that look for signs of a specific infectious agent—respiratory syncytial virus (RSV) or the influenza virus, for instance—the new strategy casts a wide net that takes into account changes in the patterns of gene expression in the bloodstream, which differ depending on whether a person is fighting off a bacterial or a viral infection. As reported in Science Translational Medicine [4], Geoffrey Ginsburg, Christopher Woods, and Ephraim Tsalik of Duke University’s Center for Applied Genomics and Precision Medicine, Durham, NC, and their colleagues collected blood samples from 273 people who came to the emergency room (ER) with signs of acute respiratory illness. Standard diagnostic tests showed that 70 patients arrived in the ER with bacterial infections and 115 were battling viruses. Another 88 patients had no signs of infection, with symptoms traced instead to other health conditions.

The #COVID19 pandemic isn’t over yet. But museums are already chronicling this public health crisis. Find out what… https://t.co/2xJ3G6jYpx 1 day ago

Researchers have ID’d certain DNA-repair “hot spots” in #neurons that may play a critical role in neural identity a… https://t.co/MXZ4UtBHAe 1 day ago