Snapshots of Life: Stronger Than It Looks 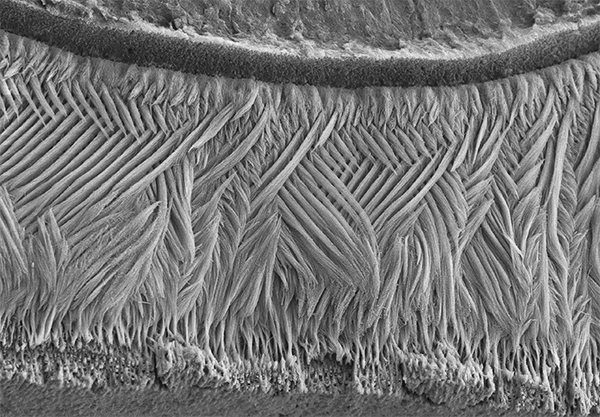 If you went out and asked folks what they’re seeing in this picture, most would probably guess an elegantly woven basket, or a soft, downy feather. But what this scanning electron micrograph actually shows isn’t at all soft: it is the hardest substance in the mammalian body—tooth enamel!

This exquisitely detailed image—a winner of the Federation of American Societies for Experimental Biology’s 2015 BioArt competition—was generated by Olivier Duverger and Maria Morasso of NIH’s National Institute of Arthritis and Musculoskeletal and Skin Diseases. Before placing a sample of mouse dental enamel under the microscope, they treated it briefly with acid in order to reveal how the tissue’s mineralized rods are interwoven in a manner that gives teeth both strength and flexibility.