Tags: anniversary, Somewhere Past the Pandemic, song, The Children's Inn

In Memory of Andrew Lee

A lot of young people are driven—driven to get a good education, land a great job, find true love, or see the world. But, today, I want to honor the life of a young man who was driven by something even bigger. Andrew Lee was driven to cure kidney cancer—not only for himself, but for others as well.

I knew and loved Andrew. And so did the legion of doctors, nurses, researchers, and other team members who had the privilege of fighting cancer with him over four very challenging years. Andrew was 19, just finishing his freshman year of college, when he received a devastating diagnosis: stage 4 kidney cancer, a rare type called Hereditary Leiomyomatosis and Renal Cell Cancer (HLRCC). There is no known cure for HLRCC, and doctors estimated his survival at about a year at best.

Still, Andrew and his family weren’t about to go hide somewhere and wait for the end. They began a journey that led him to take part in at least seven clinical trials, including ones at Yale University, New Haven, CT; Georgetown University, Washington, DC; and the NIH Clinical Center, Bethesda, MD. Experimental treatments slowed down the cancer, but sometimes made him terribly sick. Yet, Andrew always remained optimistic and cheerful. If a trial didn’t help him, maybe it would help someone else.

Andrew’s generosity didn’t stop there. Inspired by his father’s gift of a totally awesome 2015 Liberty Walk Nissan GT-R, he founded the Driven To Cure (DTC) nonprofit and traveled the country in his orange sports car to raise funds for kidney cancer research. According to the National Cancer Institute, nearly 63,000 Americans are diagnosed with kidney and renal pelvis cancers each year.

Andrew figured out how to put the “fun” in fundraising, drawing crowds at car shows and raising more than $500,000 in donations in just three years. His efforts were recognized by the Foundation for the NIH’s Charlie Sanders Award, which I had the privilege of presenting to him last fall.

But I think it was Andrew’s humanity that touched us the most. He always had time to share his story, to encourage another child or adult struggling with a frightening diagnosis. He’d give thrills to kids at The Children’s Inn at NIH when he rumbled into the parking lot with his 700 horsepower GT-R. At car shows, throngs of people were drawn in by the turbocharged ride and then captivated by the young man with the bright smile and compelling story. Andrew wrote: “I realized that the vehicle of my dreams was also the vehicle which gave me the opportunity to make a difference; to do something bigger than myself.”

Still, on the personal level, kidney cancer proved relentless. Options for treatment eventually ran out. As the disease progressed, Andrew and his family had to make another difficult transition—choosing to celebrate life, even in the face of its approaching end. He needed a wheelchair, so family and friends came up with one, keeping in mind one of Andrew’s last wishes. When Andrew needed 24-hour care and pain control, he was admitted to the NIH Clinical Center Hospice Unit, where comfort could be provided and his loved ones could gather around. That even included getting government permission for a visit from his dog Milo! Surrounded by friends and family, he died peacefully on April 21.

Andrew made friends with everyone—especially kids at The Children’s Inn. One special buddy was Isaac Barchus, who has a rare autoinflammatory disease called CANDLE Syndrome. When he was back home in Omaha, NE, Isaac enjoyed challenging Andrew to long-distance video games, especially FIFA Soccer.

Although Isaac can walk, it can be very painful, so he sometimes turned to an old, beat-up wheelchair to cover long distances. But not anymore. When Isaac turned 15 on June 7, Andrew’s father Bruce Lee fulfilled his son’s wish for the future of his wheelchair. He presented Isaac with Andrew’s wheelchair, which had now been painted the same orange color as Andrew’s GT-R and emblazoned with the feisty slogan on Andrew’s personalized license plate—F CANCR. What a cool birthday gift!

During his final weeks and days, Andrew and his dad often listened to the Andy Grammer song, “Don’t Give Up on Me.” Andrew’s family never gave up on him, and he never gave up on them either. In fact, Andrew never gave up caring, loving, and believing. He wouldn’t want us to either, as his favorite song reminds us: “I will fight, I will fight for you; I always do until my heart is black and blue.”

Yes, Andrew, our hearts are black and blue from losing you. But we won’t give up on all you stood for in your short but inspiring life. Race In Peace, dear Andrew.

Remembering Andrew Lee (Foundation for the National Institutes of Health)

Video: Fighting Cancer With a 700-hp Nissan GT-R (The Drive)

Video: Andy Grammer—”Don’t Give Up On Me” [Official Lyric Video] from the film Five Feet Apart 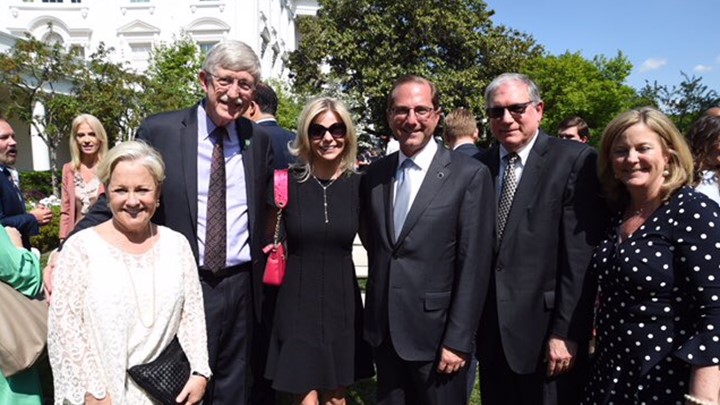 It was a beautiful afternoon to support First Lady Melania Trump’s “Be Best” campaign on May 7, 2018 at an event held in the White House Rose Garden. The “Be Best” campaign promotes healthy living, using social media in positive ways, and reducing opioid abuse. In this photo (from left to right) are: Fern Jennifer Stone; the chief development and communications officer for the Children’s Inn at NIH; Francis Collins; Jennie Lucca, chief executive officer of the Children’s Inn; Alex Azar, secretary of the U. S. Department of Health and Human Services; Larry Tabak, NIH deputy director; and Laura King, senior director of Volunteers and Community Outreach at the Children’s Inn.
Courtesy of @SecAzar

#NIH fuels scientific discovery. But what about discovery into your own personal health? Why not both? Read about… https://t.co/KpY0rlT0vU 9 hours ago