COVID-19 Can Damage Hearts of Some College Athletes

There’s been quite a bit of discussion in the news lately about whether to pause or resume college athletics during the pandemic. One of the sticking points has been uncertainty about how to monitor the health of student athletes who test positive for SARS-CoV-2, the novel coronavirus that causes COVID-19. As a result, college medical staff don’t always know when to tell athletes that they’ve fully recovered and it’s safe to start training again.

The lack of evidence owes to two factors. Though it may not seem like it, this terrible coronavirus has been around for less than a year, and that’s provided little time to conduct the needed studies with young student athletes. But that’s starting to change. An interesting new study in the journal JAMA Cardiology provides valuable and rather worrisome early data from COVID-positive student athletes evaluated for an inflammation of the heart called myocarditis, a well-known complication [1].

Saurabh Rajpal and his colleagues at the Ohio State University, Columbus, used cardiac magnetic resonance imaging (MRI) to visualize the hearts of 26 male and female student athletes. They participated in a range of sports, including football, soccer, lacrosse, basketball, and track. All of the athletes were referred to the university’s sports medicine clinic this past summer after testing positive for SARS-CoV-2. All had mild or asymptomatic cases of COVID-19.

Even so, the MRI scans, taken 11-53 days after completion of quarantine, showed four of the student athletes (all males) had swelling and tissue damage to their hearts consistent with myocarditis. Although myocarditis often resolves on its own over time, severe cases can compromise the heart muscle’s ability to beat. That can lead to heart failure, abnormal heart rhythms, and even sudden death in competitive athletes with normal heart function [2].

The investigators also looked for more subtle findings of cardiac injury in these athletes, using a contrast agent called gadolinium and measuring its time to appear in the cardiac muscle during the study. Eight of the 26 athletes (31 percent) had late gadolinium enhancement, suggestive of prior myocardial injury.

Even though it’s a small study, these results certainly raise concerns. They add more evidence to a prior study, published by a German group, that suggested subtle cardiac consequences of SARS-CoV-2 infection may be common in adults [3].

Rajpal and his colleagues will continue to follow the athletes in their study for several more months. The researchers will keep an eye out for other lingering symptoms of COVID-19, generate more cardiac MRI data, and perform exercise testing.

As this study shows, we still have a lot to learn about the long-term consequences of COVID-19, which can take people on different paths to recovery. For athletes, that path is the challenge to return to top physical shape and feel ready to compete at a high level. But getting back in uniform must also be done safely to minimize any risks to an athlete’s long-term health and wellbeing. The more science-based evidence that’s available, the more prepared athletes at large and small colleges will be to compete safely in this challenging time.

Are Sports Organizations Playing a Role in America’s Obesity Problem?

Last September, the National Football League struck a deal with Frito-Lay that allowed the company to produce limited-edition bags of Tostitos tortilla chips, with each package bearing the logo of one of 19 featured NFL teams. Several months earlier, Major League Baseball announced that Nathan’s Famous would be its first-ever official hot dog. Now the first-ever comprehensive analysis of such food and beverage sponsorships by major sports organizations shows just how pervasive these deals are. The confusing messages they send about physical fitness and healthy eating habits can’t be helping our national problem with obesity [1].

Among the 10 sports organizations that young viewers watch most, from the NFL to Little League, the NIH-funded research team identified dozens of sponsors and hundreds of associated advertisements promoting food and beverage products. The vast majority of those ads touted unhealthy items, including chips, candies, sodas, and other foods high in fat, sodium, or sugar, and low in nutritional value.

Those findings are especially concerning in light of the latest figures from the National Health and Nutrition Examination Survey (NHANES), co-supported by NIH [2], It shows that, despite long-standing public health efforts to curb the obesity epidemic, more than 18 percent of young people in America remain obese. Among adults, the picture is even more discouraging: nearly 40 percent of American adults were obese in 2015-2016, up from about 34 percent in 2007-2008.

What was Toben Nelson, a University of Minnesota epidemiologist who studies the health risks of alcohol abuse and obesity, doing this summer lugging around a heavy equipment bag after work? Giving back to his community. Nelson volunteered as a coach for the Roseville Raiders, a 13-year-old-and-under traveling baseball team that just wrapped up its season by winning the prestigious Gopher State Tournament of Champions in their age group.

In the fall, Nelson will gear up for hoops as the volunteer president of the Roseville Youth Basketball Association, which provides an opportunity for kids in this Minneapolis-St. Paul suburb to take part in organized sports. Nelson says volunteering grounds him as a scientist. It reminds him every single day that his NIH-supported research back at the office affects real lives and benefits real communities like his own. 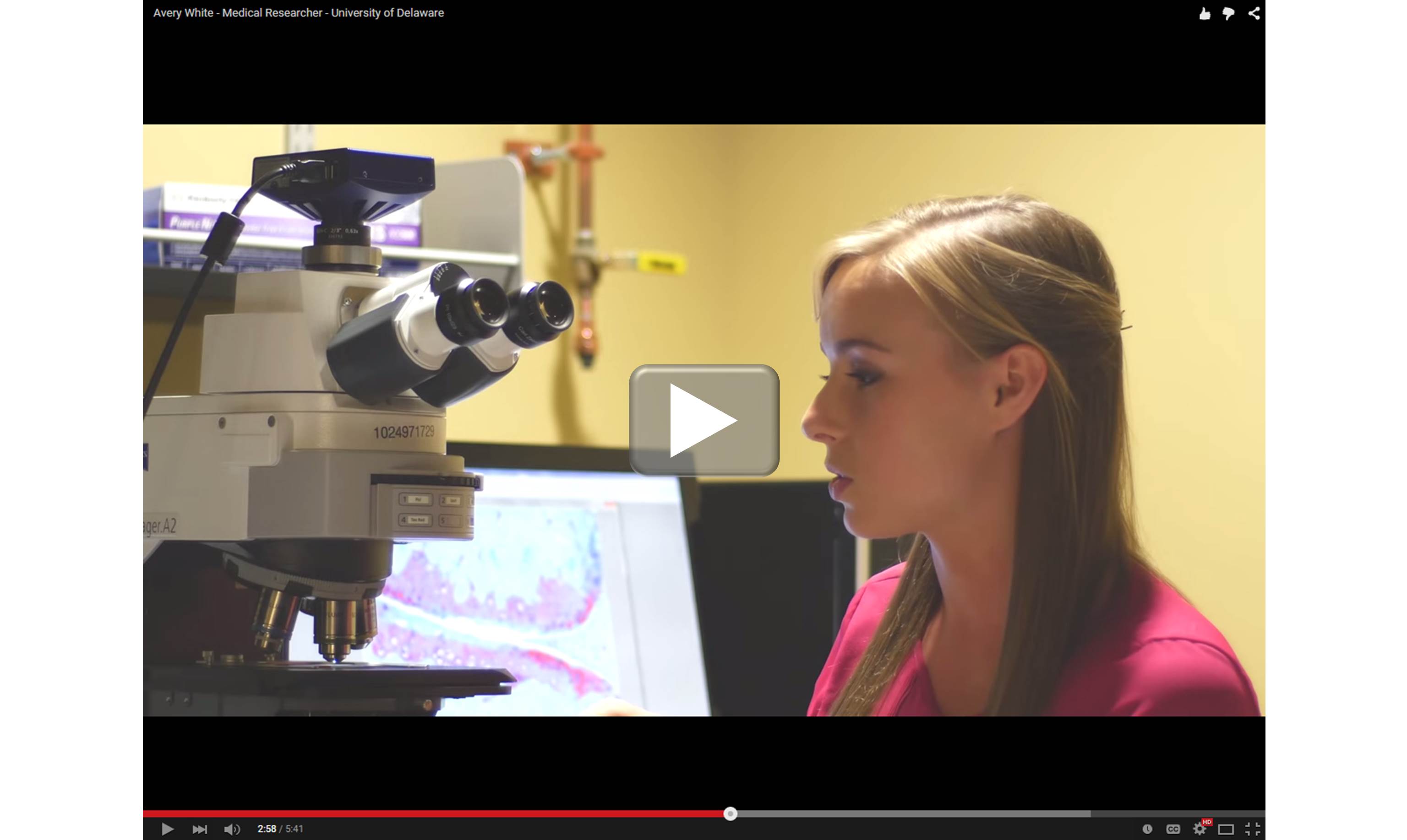 If you like sports and you like science, I think you’ll enjoy meeting Avery White, an undergraduate studying biomedical engineering at the University of Delaware in Newark. In this LabTV profile, we catch up with White as she conducts basic research that may help us better understand—and possibly prevent—the painful osteoarthritis that often pops up years after knee injuries from sports and other activities.

Many athletes, along with lots of regular folks, are familiar with the immediate and painful consequences of tearing the knee’s cartilage (meniscus) or anterior cruciate ligament (ACL). Most also know that such injuries can usually be repaired by surgery. Yet, many people aren’t aware of the longer-term health threat posed by ACL and meniscus tears: a substantially increased risk of developing osteoarthritis years down the road—in some individuals, even as early as age 30. While treatments are available for such post-traumatic osteoarthritis, including physical therapy, pain medications, and even knee-replacement surgery, more preventive options are needed to avoid these chronic joint problems.

White’s interest in this problem is personal. She’s a volleyball player herself, her sister tore her ACL, and her mother damaged her meniscus. After spending a summer working in a lab, this Wilmington, DE native has grown increasingly interested in the field of tissue engineering. She says it offers her an opportunity to use “micro” cell biology techniques to address a “macro” challenge: finding ways to encourage the body to generate healthy new cells that may prevent or reverse injury-induced osteoarthritis.

What’s up next for White? She says maybe a summer internship in a lab overseas, and, on the more distant horizon, graduate school with the goal of earning a Ph.D.