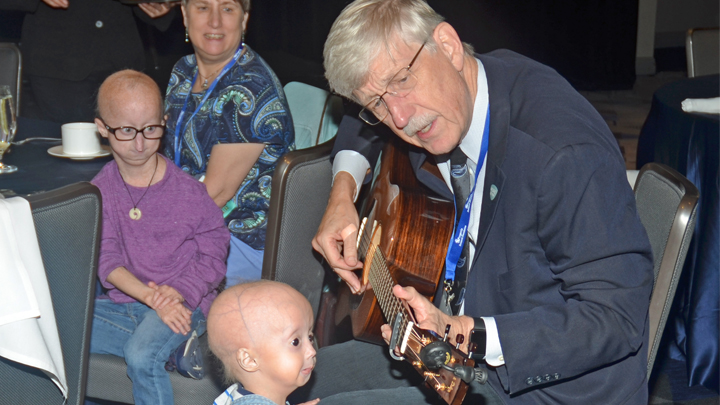 I enjoyed presenting some of my lab’s work at the Progeria Research Foundation’s 9th International Scientific Workshop and later meeting with some of the kids in attendance. Here, I got to sing a song for 17-year-old Meghan (left) from the United States and 2-year-old Alptug (middle) from Turkey. The workshop was held in Cambridge, MA from September 20-22, 2018. Credit: Carol Moroney. I’d like to tell you about a rare genetic disease that’s very close to my heart: Hutchinson-Gilford progeria syndrome, also called progeria. Though you may not recognize the name, you may well have seen pictures of children with this fatal premature aging disease. By 18-24 months, apparently healthy babies stop growing and begin to lose their hair. They develop wrinkled skin and joint problems and they suffer many other conditions of old age. Though their mental development is entirely normal, they often die of heart disease or stroke by age 12 or 13.

A decade ago, my research lab helped discover the cause of progeria: a mutation in the lamin-A gene [1]. Just a single letter substitution in the genetic code (C to T) creates a toxic version of the protein. The abnormal protein is missing a segment, and is no longer digestible by an enzyme called ZMPSTE24—essentially a molecular scissors. Without that final snip, the lamin-A protein causes molecular havoc.