As a cardiac electrophysiologist, Deeptankar DeMazumder has worked for years with people at risk for sudden cardiac arrest (SCA). Despite the latest medical advances, less than 10 percent of individuals stricken with an SCA will survive this highly dangerous condition in which irregular heart rhythms, or arrhythmias, cause the heart suddenly to stop beating.

In his role as a physician, DeMazumder keeps a tight focus on the electrical activity in their hearts, doing his best to prevent this potentially fatal event. In his other role, as a scientist at the University of Cincinnati College of Medicine, DeMazumder is also driven by a life-saving aspiration: finding ways to identify at-risk individuals with much greater accuracy than currently possible—and to develop better ways of protecting them from SCAs. He recently received a 2020 NIH Director’s New Innovator Award to pursue one of his promising ideas.

SCAs happen without warning and can cause death within minutes. Poor heart function and abnormal heart rhythms are important risk factors, but it’s not possible today to predict reliably who will have an SCA. However, doctors already routinely capture a wealth of information in electrical signals from the heart using electrocardiograms (ECGs). They also frequently use electroencephalograms (EEGs) to capture electrical activity in the brain.

DeMazumder’s innovative leap is to look at these heart and brain signals jointly, as well as in new ways, during sleep. According to the physician-scientist, sleep is a good time to search for SCA signatures in the electrical crosstalk between the heart and the brain because many other aspects of brain activity quiet down. He also thinks it’s important to pay special attention to what happens to the body’s electrical signals during sleep because most sudden cardiac deaths happen early in the waking hours, for reasons that aren’t well understood.

He has promising preliminary evidence from both animal models and humans suggesting that signatures within heart and brain signals are unique predictors of sudden death, even in people who appear healthy [1]. DeMazumder has already begun developing a set of artificial intelligence algorithms for jointly deciphering waveform signals from the heart, brain, and other body signals [2,3]. These new algorithms associate the waveform signals with a wealth of information available in electronic health records to improve upon the algorithm’s ability to predict catastrophic illness.

DeMazumder credits his curiosity about what he calls the “art and science of healing” to his early childhood experiences and his family’s dedication to community service in India. It taught him to appreciate the human condition, and he has integrated this life-long awareness into his Western medical training and his growing interest in computer science.

For centuries, humans have talked about how true flourishing needs both head and heart. In DeMazumder’s view, science is just beginning to understand the central role of heart-brain conversations in our health. As he continues to capture and interpret these conversations through his NIH-supported work, he hopes to find ways to identify individuals who don’t appear to have serious heart disease but may nevertheless be at high risk for SCA. In the meantime, he will continue to do all he can for the patients in his care.

A GPS-like System for Single-Cell Analysis

Courtesy of the Chen and Macosko labs

A few years ago, I highlighted a really cool technology called Drop-seq for simultaneously analyzing the gene expression activity inside thousands of individual cells. Today, one of its creators, Evan Macosko, reports significant progress in developing even better tools for single-cell analysis—with support from an NIH Director’s New Innovator Award.

In a paper in the journal Science, Macosko, Fei Chen, and colleagues at the Broad Institute of Harvard and Massachusetts Institute of Technology (MIT), Cambridge, recently unveiled another exciting creation called Slide-seq [1]. This technology acts as a GPS-like system for mapping the exact location of each of the thousands of individual cells undergoing genomic analysis in a tissue sample.

This 3D video shows the exquisite precision of this new cellular form of GPS, which was used to generate a high-resolution map of the different cell types found in a tiny cube of mouse brain tissue. Specifically, it provides locations of the cell types and gene expression in the hippocampal regions called CA1 (green), CA2/3 (blue), and dentate gyrus (red).

Because using Slide-seq in the lab requires no specialized imaging equipment or skills, it should prove valuable to researchers across many different biomedical disciplines who want to look at cellular relationships or study gene activity in tissues, organs, or even whole organisms.

How does Slide-seq work? Macosko says one of the main innovations is an inexpensive rubber-coated glass slide nicknamed a puck. About 3 millimeters in diameter, pucks are studded with tens of thousands of 10 micron-sized beads, each one decorated with a random snippet of genetic material—an RNA barcode—that serves as its unique identifier of the bead.

The barcodes are sequenced en masse, and the exact location of each barcoded bead is indexed using innovative software developed by a team led by Chen, who is an NIH Director’s Early Independence awardee.

Then, the researchers place a sample of fresh-frozen tissue (typically, 10 micrometers, or 0.00039 inches, thick) on the puck and dissolve the tissue, lysing the cells and releasing their messenger RNA (mRNA). That leaves only the barcoded beads binding the mRNA transcripts expressed by the cells in the tissue—a biological record of the genes that were turned on at the time the sample was frozen.

The barcoded mRNA is then sequenced. The spatial position of each mRNA molecule can be inferred, using the reference index on the puck. This gives researchers a great deal of biological information about the cells in the tissue, often including their cell type and their gene expression pattern. All the data can then be mapped out in ways similar to those seen in this video, which was created using data from 66 pucks.

Slide-seq has been tested on a range of tissues from both mouse and human, replicating results from similar maps created using existing approaches, but also uncovering new biology. For example, in the mouse cerebellum, Slide-seq allowed the researchers to detect bands of variable gene activity across the tissues. This intriguing finding suggests that there may be subpopulations of cells in this part of the brain that have gene activity influenced by their physical locations.

Such results demonstrate the value of combining cell location with genomic information. In fact, Macosko now hopes to use Slide-seq to study the response of brain cells that are located near the buildup of damaged amyloid protein associated with the early-stage Alzheimer’s disease. Meanwhile, Chen is interested in pursuing cell lineage studies in a variety of tissues to see how and where changes in the molecular dynamics of tissues can lead to disease.

These are just a few examples of how Slide-seq will add to the investigative power of single-cell analysis in the years ahead. In meantime, the Macosko and Chen labs are working hard to develop even more innovative approaches to this rapidly emerging areas of biomedical research, so who knows what “seq” we will be talking about next?

The purple pods that you see in this scanning electron micrograph are the H5N2 avian flu virus, a costly threat to the poultry and egg industry and, in very rare instances, a health risk for humans. However, these particular pods are unlikely to infect anything because they are trapped in a gray mesh of carbon nanotubes. Made by linking carbon atoms into a cylindrical pattern, such nanotubes are about 10,000 times smaller than width of a human hair.

The nanotubes above have been carefully aligned on a special type of silicon chip called a carbon-nanotube size-tunable-enrichment-microdevice (CNT-STEM). As described recently in Science Advances, this ultrasensitive device is designed to capture viruses rapidly based on their size, not their molecular characteristics [1]. This unique feature enables researchers to detect completely unknown viruses, even when they are present in extremely low numbers. In proof-of-principle studies, CNT-STEM made it possible to collect and detect viruses in a sample at concentrations 100 times lower than with other methods, suggesting the device and its new approach will be helpful in the ongoing hunt for new and emerging viruses, including those that infect people. 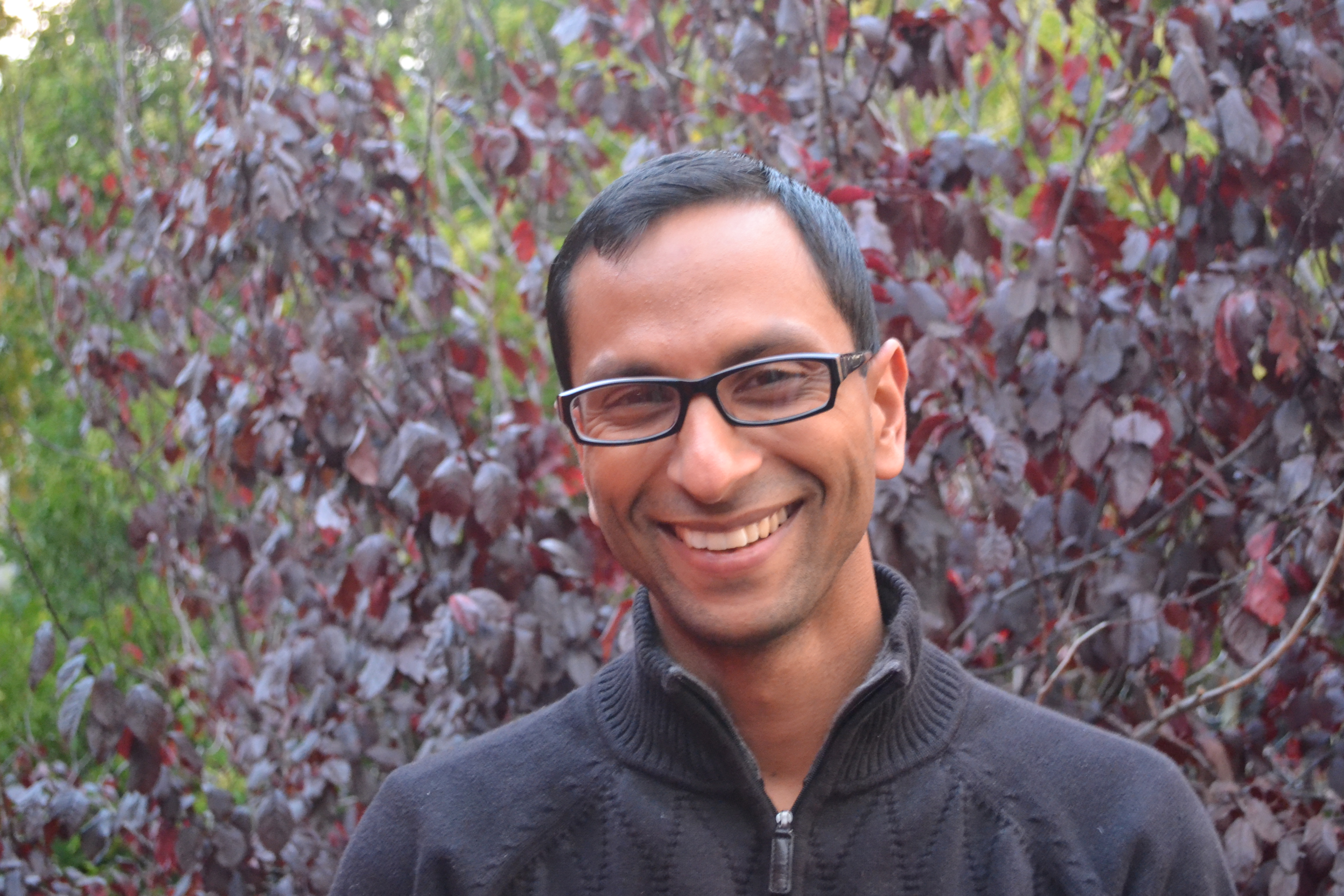