For patients who’ve succeeded in knocking out a bad urinary tract infection (UTI) with antibiotic treatment, it’s frustrating to have that uncomfortable burning sensation flare back up. Researchers are hopeful that this striking work of science and art can help them better understand why severe UTIs leave people at greater risk of subsequent infection, as well as find ways to stop the vicious cycle.

Here you see the bladder (blue) of a laboratory mouse that was re-infected 24 hours earlier with the bacterium Escherichia coli (pink), a common cause of UTIs. White blood cells (yellow) reach out with what appear to be stringy extracellular traps to immobilize and kill the bacteria.

When someone suffers a fully severed spinal cord, it’s considered highly unlikely the injury will heal on its own. That’s because the spinal cord’s neural tissue is notorious for its inability to bridge large gaps and reconnect in ways that restore vital functions. But the image above is a hopeful sight that one day that could change.

Here, a mouse neural stem cell  (blue and green) sits in a lab dish, atop a special gel containing a mat of synthetic nanofibers (purple). The cell is growing and sending out spindly appendages, called axons (green), in an attempt to re-establish connections with other nearby nerve cells.

Bacteria are single-cell organisms that reproduce by dividing in half. Proteins within these cells organize themselves in a number of fascinating ways during this process, including a recently discovered mechanism that makes the mesmerizing pattern of waves, or oscillations, you see in this video. Produced when the protein MinE chases the protein MinD from one end of the cell to the other, such oscillations are thought to center the cell’s division machinery so that its two new “daughter cells” will be the same size.

To study these dynamic patterns in greater detail, Anthony Vecchiarelli purified MinD and MinE proteins from the bacterium Escherichia coli. Vecchiarelli, who at the time was a postdoc in Kiyoshi Mizuuchi’s intramural lab at NIH’s National Institute of Diabetes and Digestive and Kidney Diseases (NIDDK), labeled the proteins with fluorescent markers and placed them on a synthetic membrane, where their movements were then visualized by total internal reflection fluorescence microscopy. The proteins self-organized and generated dynamic spirals of waves: MinD (blue, left); MinE (red, right); and both MinD and MinE (purple, center) [1].

When you have a bright idea or suddenly understand something, you might say that a light bulb just went on in your head. But, as the flashing lights of this very cool video show, the brain’s signaling cells, called neurons, continually switch on and off in response to a wide range of factors, simple or sublime.

The technology used to produce this video—a recent winner in the Federation of American Societies for Experimental Biology’s BioArt contest—takes advantage of the fact that whenever a neuron is activated, levels of calcium increase inside the cell. To capture that activity, graduate student Caitlin Vander Weele in Kay M. Tye’s lab at the Picower Institute for Learning and Memory, Massachusetts Institute of Technology (MIT), Cambridge, MA, engineered neurons in a mouse’s brain to produce a bright fluorescent signal whenever calcium increases. Consequently, each time a neuron was activated, the fluorescent indicator lit up and the changes were detected with a miniature microscope. The brighter the flash, the greater the activity! 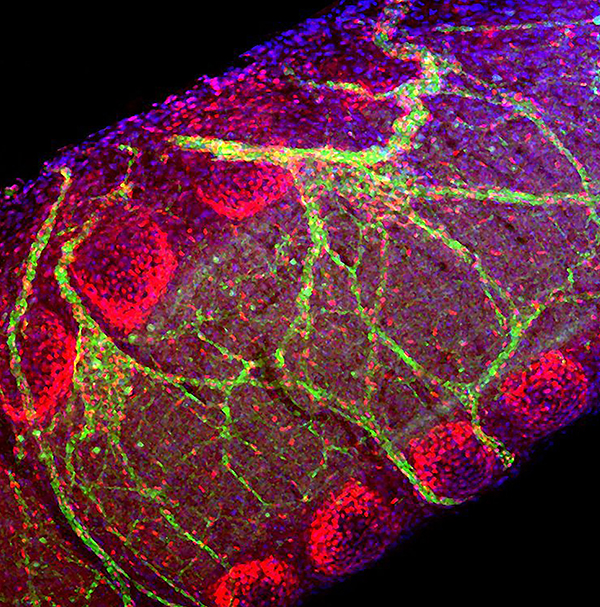