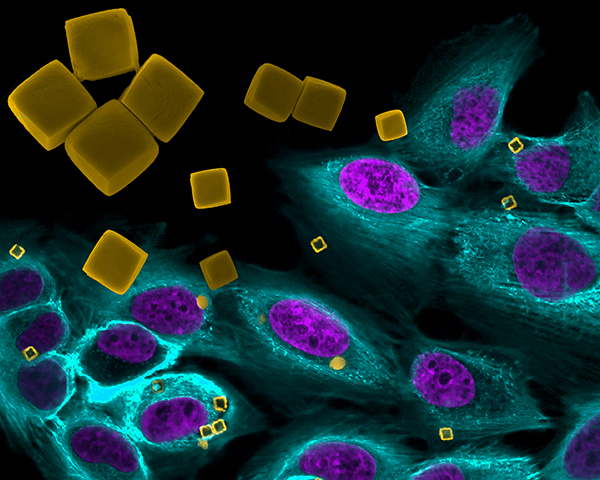 If you’ve ever tried to take photos of wiggly kids, you know that it usually takes several attempts before you get the perfect shot. It’s often the same for biomedical researchers when taking images with microscopes because there are so many variables—from sample preparation to instrument calibration—to take into account. Still, there are always exceptions where everything comes together just right, and you are looking at one of them! On her first try at using a confocal microscope to image this cross-section of a mouse embryo’s torso, postdoc Shachi Bhatt captured a gem of an image that sheds new light on mammalian development.

Bhatt, who works in the NIH-supported lab of Paul Trainor at the Stowers Institute for Medical Research, Kansas City, MO, produced this micrograph as part of a quest to understand the striking parallels seen between the development of the nervous system and the vascular system in mammals. Fluorescent markers were used to label proteins uniquely expressed in each type of tissue: reddish-orange delineates developing nerve cells; gray highlights developing blood vessels; and yellow shows where the nerve cells and blood vessels overlap.

As long as researchers have been growing bacteria on Petri dishes using a jelly-like growth medium called agar, they have been struck by the interesting colors and growth patterns that microbes can produce from one experiment to the next. In the 1920s, Sir Alexander Fleming, the Scottish biologist who discovered penicillin, was so taken by this phenomenon that he developed his own palette of bacterial “paints” that he used in his spare time to create colorful pictures of houses, ballerinas, and other figures on the agar [1].

Fleming’s enthusiasm for agar art lives on among the current generation of microbiologists. In this short video, the agar (yellow) is seeded with bacterial colonies and, through the magic of time-lapse photography, you can see the growth of the colonies into what appears to be a lovely bouquet of delicate flowers. This piece of living art, developing naturally by bacterial colony expansion over the course of a week or two, features members of three bacterial genera: Serratia (red), Bacillus (white), and Nesterenkonia (light yellow).

Snapshots of Life: A Kaleidoscope of Worms

What might appear to be a view inside an unusual kaleidoscope is actually a laboratory plate full of ravenous roundworms (Caenorhabditis elegans) as seen through a microscope. Tens of thousands of worms (black), each about 1 millimeter in length at adulthood, are grazing on a field of bacteria beneath them. The yellow is a jelly-like growth medium called agar that feeds the bacteria, and the orange along the borders was added to enhance the sunburst effect.

The photo was snapped and stylized by NIH training grantee Adam Brown, a fourth-year Ph.D. student in the lab of David Biron at the University of Chicago. Brown uses C. elegans to study the neurotransmitter serotonin, a popular drug target in people receiving treatment for depression and other psychiatric disorders. This tiny, soil-dwelling worm is a go-to model organism for neuroscientists because of its relative simplicity, short life spans, genetic malleability, and complete cell-fate map. By manipulating the different components of the serotonin-signaling system in C. elegans, Brown and his colleagues hope to better understand the most basic circuitry in the central nervous system that underlies decision making, in this case choosing to feed or forage.