Just as two companies can merge to expand their capabilities, two technologies can become more powerful when integrated into one. That’s why researchers recently merged two breakthrough technologies into one super powerful new method called ExSeq. The two-in-one technology enables researchers for the first time to study an intact tissue sample and track genetic activity on the spot within a cell’s tiniest recesses, or microenvironments—areas that have been largely out of reach until now.

ExSeq, which is described in a paper in the journal Science [1], will unleash many new experimental applications. Beyond enabling more precise analysis of the basic building blocks of life, these applications include analyzing tumor biopsies more comprehensively and even unlocking mysteries of how the brain works. The latter use is on display in this colorful cross-section of a mouse’s hippocampus, a region of the brain involved in the memory of facts and events.

Here you can see in precise and unprecedented detail the areas where genes are activated (magenta) in the brain’s neurons (green). In this particular example, the genes are working within subregions of the hippocampus called the CA1 and dentate gyrus regions (white, bottom and top left).

Tissue expansion swells the contents of tissue sections up to 100 times their normal size but retains their same physical structure [2]. It’s sort of like increasing the font size and line spacing on a hard-to-read document. It makes cellular details that were outside the resolution range of the light microscope suddenly accessible.

With the information inside cells now easier to see, the next step involves a technique called FISSEQ (fluorescent in situ sequencing), which generates readouts of thousands of mRNA molecules in cells [3]. FISSEQ works by detecting individual RNA molecules where they are inside cells and amplifying them into “nanoballs,” or rolled-up copies of themselves. Each nanoball can be read using standard sequencing methods and a fluorescence microscope.

Using the combined ExSeq approach, the team can analyze precisely where gene activity changes within tiny cellular microenvironments. Or, it can compile a more-comprehensive readout of gene activity within cells by analyzing as many gene readouts as detectable. When used in the hippocampus, this untargeted, “agnostic” approach led to some surprises—revealing unusual forms of RNA and, by association, genes for proteins not previously linked with communication between neurons.

Like many technology developments, the scientists envision that ExSeq can be used in many ways, including for more precise analysis of tumor biopsies. To illustrate this point, the researchers analyzed breast cancer metastases, which are cells from breast tumors that have spread to other areas in the body. Metastases contain many different cell types, including cancer cells and immune cells.

Using ExSeq, Boyden and Church learned that these distinct cell types can behave differently depending on where they are inside a tumor. They discovered, for example, that immune B cells near tumor cells expressed certain inflammatory genes at a higher level than immune B cells that were further away. Precise information about a tumor’s composition and activity may lead to development of more targeted approaches to attack it.

Many discoveries come on the heels of transformative new technologies. ExSeq shines a much brighter light on the world of the very small. And that should help us better understand how different parts of cells work together, as well as how cells work with each other in the brain, in cancer, and throughout the body.

Putting Bone Metastasis in the Spotlight

When cancers spread, or metastasize, from one part of the body to another, bone is a frequent and potentially devastating destination. Now, as you can see in this video, an NIH-funded research team has developed a new system that hopefully will provide us with a better understanding of what goes on when cancer cells invade bone.

In this 3D cross-section, you see the nuclei (green) and cytoplasm (red) of human prostate cancer cells growing inside a bioengineered construct of mouse bone (blue-green) that’s been placed in a mouse. The new system features an imaging window positioned next to the new bone, which enabled the researchers to produce the first series of direct, real-time micrographs of cancer cells eroding the interior of bone.

For various technical reasons, researchers have typically had to displace cells, fix them in position, mount them onto slides, and look through a microscope’s viewfinder to see the cells. It can be a little like trying to study life in the ocean by observing a fish cooped up in an 8-gallon tank.

Now, a team partially funded by NIH has developed a new hybrid imaging technology to produce amazing, live-action 3D movies of living cells in their more natural state. In this video, you’re looking at a human breast cancer cell (green) making its way through a blood vessel (purple) of a young zebrafish. 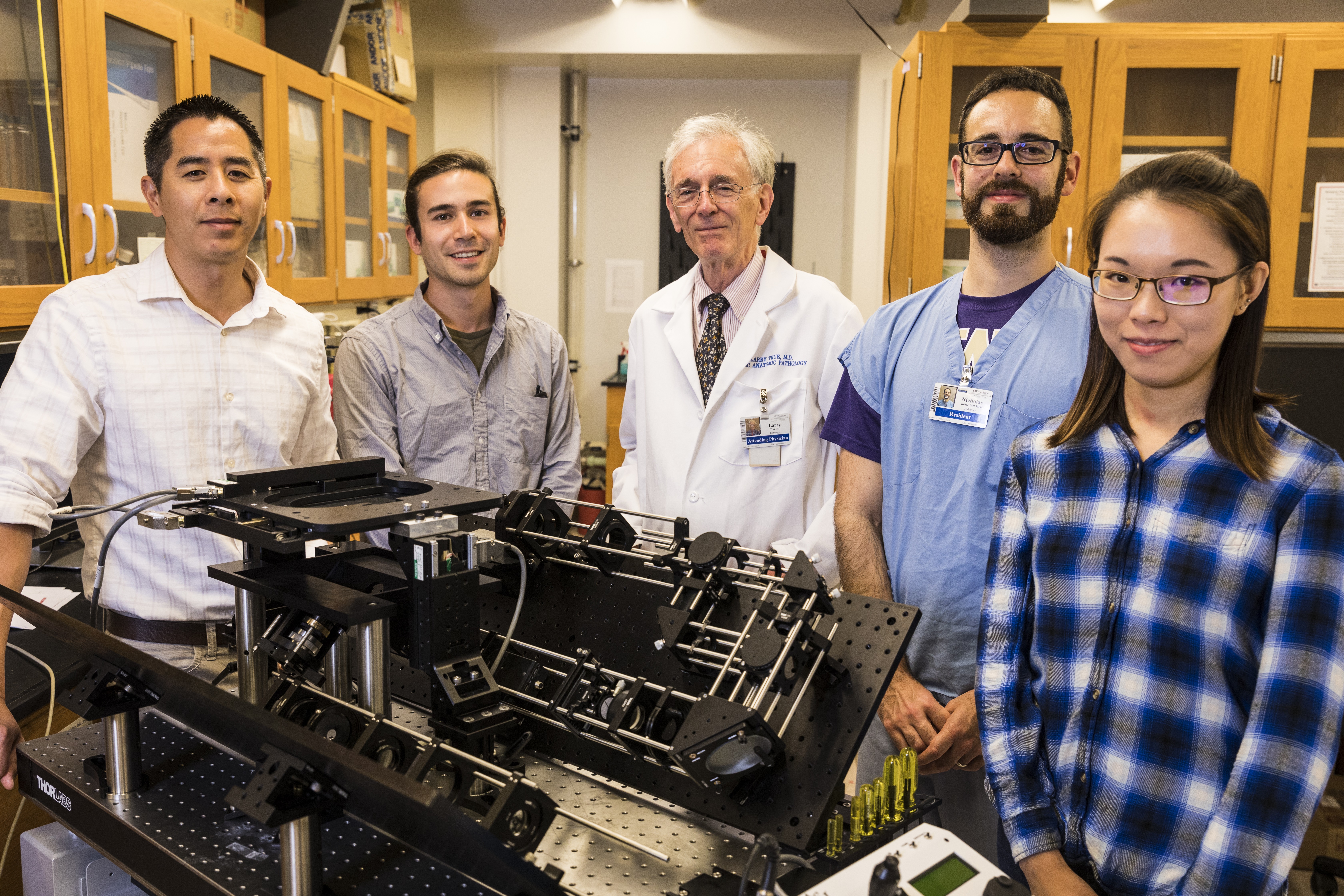