In addition to memory loss and confusion, many people with Alzheimer’s disease have trouble sleeping. Now an NIH-funded team of researchers has evidence that the reverse is also true: a chronic lack of sleep may worsen the disease and its associated memory loss.

The new findings center on a protein called tau, which accumulates in abnormal tangles in the brains of people with Alzheimer’s disease. In the healthy brain, active neurons naturally release some tau during waking hours, but it normally gets cleared away during sleep. Essentially, your brain has a system for taking the garbage out while you’re off in dreamland.

The latest findings in studies of mice and people further suggest that sleep deprivation upsets this balance, allowing more tau to be released, accumulate, and spread in toxic tangles within brain areas important for memory. While more study is needed, the findings suggest that regular and substantial sleep may play an unexpectedly important role in helping to delay or slow down Alzheimer’s disease.

It’s long been recognized that Alzheimer’s disease is associated with the gradual accumulation of beta-amyloid peptides and tau proteins, which form plaques and tangles that are considered hallmarks of the disease. It has only more recently become clear that, while beta-amyloid is an early sign of the disease, tau deposits track more closely with disease progression and a person’s cognitive decline.

Such findings have raised hopes among researchers including David Holtzman, Washington University School of Medicine, St. Louis, that tau-targeting treatments might slow this devastating disease. Though much of the hope has focused on developing the right drugs, some has also focused on sleep and its nightly ability to reset the brain’s metabolic harmony.

In the new study published in Science, Holtzman’s team set out to explore whether tau levels in the brain naturally are tied to the sleep-wake cycle [1]. Earlier studies had shown that tau is released in small amounts by active neurons. But when neurons are chronically activated, more tau gets released. So, do tau levels rise when we’re awake and fall during slumber?

These findings were especially interesting because Holtzman’s team had already made a related finding in people. The team found that healthy adults forced to pull an all-nighter had a 30 percent increase on average in levels of unhealthy beta-amyloid in their cerebrospinal fluid (CSF).

The researchers went back and reanalyzed those same human samples for tau. Sure enough, the tau levels were elevated on average by about 50 percent.

Once tau begins to accumulate in brain tissue, the protein can spread from one brain area to the next along neural connections. So, Holtzman’s team wondered whether a lack of sleep over longer periods also might encourage tau to spread.

To find out, mice engineered to produce human tau fibrils in their brains were made to stay up longer than usual and get less quality sleep over several weeks. Those studies showed that, while less sleep didn’t change the original deposition of tau in the brain, it did lead to a significant increase in tau’s spread. Intriguingly, tau tangles in the animals appeared in the same brain areas affected in people with Alzheimer’s disease.

Another report by Holtzman’s team appearing early last month in Science Translational Medicine found yet another link between tau and poor sleep. That study showed that older people who had more tau tangles in their brains by PET scanning had less slow-wave, deep sleep [2].

Together, these new findings suggest that Alzheimer’s disease and sleep loss are even more intimately intertwined than had been realized. The findings suggest that good sleep habits and/or treatments designed to encourage plenty of high quality Zzzz’s might play an important role in slowing Alzheimer’s disease. On the other hand, poor sleep also might worsen the condition and serve as an early warning sign of Alzheimer’s.

For now, the findings come as an important reminder that all of us should do our best to get a good night’s rest on a regular basis. Sleep deprivation really isn’t a good way to deal with overly busy lives (I’m talking to myself here). It isn’t yet clear if better sleep habits will prevent or delay Alzheimer’s disease, but it surely can’t hurt.

A New Piece of the Alzheimer’s Puzzle

For the past few decades, researchers have been busy uncovering genetic variants associated with an increased risk of Alzheimer’s disease (AD) [1]. But there’s still a lot to learn about the many biological mechanisms that underlie this devastating neurological condition that affects as many as 5 million Americans [2].

As an example, an NIH-funded research team recently found that AD susceptibility may hinge not only upon which gene variants are present in a person’s DNA, but also how RNA messages encoded by the affected genes are altered to produce proteins [3]. After studying brain tissue from more than 450 deceased older people, the researchers found that samples from those with AD contained many more unusual RNA messages than those without AD. 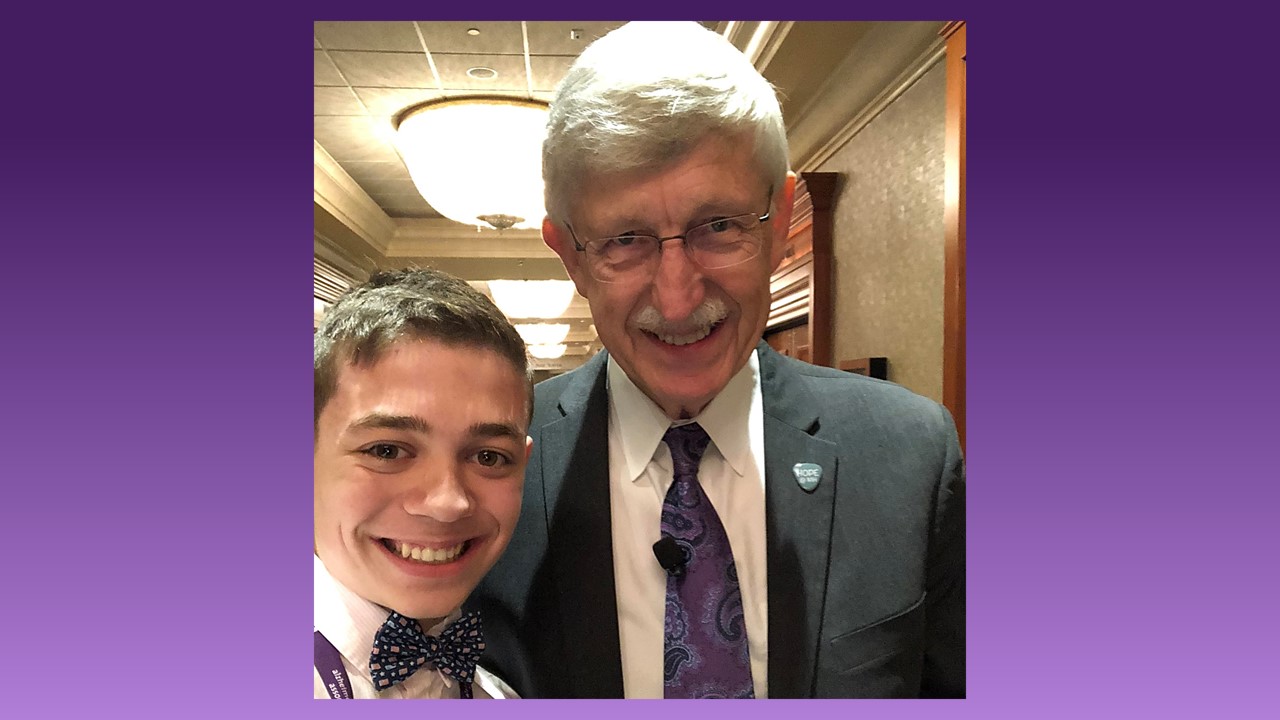 While at the Alzheimer’s Impact Movement (AIM) Advocacy Forum in Washington, DC on June 18, 2018, I posed for a “selfie” with the 15-year-old Alzheimer’s advocate Max Rosenberg. When not in school, Max helps take care of his grandmother who was diagnosed with Alzheimer’s six years ago.
Credit: Max Rosenberg

Caption: The protein tau (green) aggregates abnormally in a brain cell (blue). Tau spills out of the cell and enters the bloodstream (red). Research shows that antibodies (blue) can capture tau in the blood that reflect its levels in the  brain.
Credit: Sara Moser

Age can bring moments of forgetfulness. It can also bring concern that the forgetfulness might be a sign of early Alzheimer’s disease. For those who decide to have it checked out, doctors are likely to administer brief memory exams to assess the situation, and medical tests to search for causes of memory loss. Brain imaging and spinal taps can also help to look for signs of the disease. But an absolutely definitive diagnosis of Alzheimer’s disease is only possible today by examining a person’s brain postmortem. A need exists for a simple, less-invasive test to diagnose Alzheimer’s disease and similar neurodegenerative conditions in living people, perhaps even before memory loss becomes obvious.

One answer may lie in a protein called tau, which accumulates in abnormal tangles in the brains of people with Alzheimer’s disease and other “tauopathy” disorders. In recent years, researchers have been busy designing an antibody to target tau in hopes that this immunotherapy approach might slow or even reverse Alzheimer’s devastating symptoms, with promising early results in mice [1, 2]. Now, an NIH-funded research team that developed one such antibody have found it might also open the door to a simple blood test [3]. Please join me and others tomorrow 1/26 at 5pm ET for the #SoundHealth Network launch event, featuring… https://t.co/wCWryWzcHw 10 hours ago