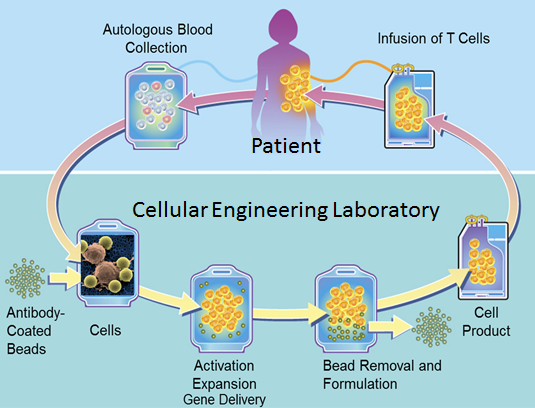 CAR-T cells have been called “a living drug” because doctors collect and manipulate a patient’s own immune cells to treat his or her cancer. Specifically, the harvested T cells are genetically engineered to produce new surface proteins (the CARs, or chimeric antigen receptors) that allow them to recognize and attack cancer cells more effectively. After expanding the number of these enhanced T cells, doctors infuse them back into patients to soup up their immune systems. The ability of T cells to attack a cancer cell is a sight to behold. Our ability to harness and direct that power is a true marvel of modern medicine.

This achievement in immunotherapy, though quintessentially modern, is the culmination of more than a century of scientific research. It all started back in 1890, when New York-based surgeon William Coley found a handful of patients who survived apparently fatal cancers after they suffered an acute infection. He developed a toxin—“Coley’s toxin”—that he used stimulate patients’ immune systems to treat their cancer. He believed his treatment worked. The wider medical profession was skeptical, and failure was all too common.

Over the decades, medical interest in immunotherapy waxed and waned; and researchers developed an array of immunotherapeutic interventions, to varying effect. Ultimately, a number of basic science advances in immunology, cell biology, and genetics were needed to make real progress in immunotherapy possible.

These advances came largely in the 1970s and 1980s—many with NIH support. They were recognized by visionaries, such as NIH’s own Steven Rosenberg, as providing new insights into longstanding questions about how to train our immune systems to recognize and fight cancer. Rosenberg, still at NIH’s National Cancer Institute (NCI), had been thinking about immunotherapy since the 1960s, when he witnessed the rare case of a patient with terminal cancer who appeared to be cured by a separate infection. Drawing upon new scientific knowledge, Rosenberg had early success in the 1980s with a precursor to CAR-T therapy [3]. More recently, he developed and successfully administered his own version of CAR-T [4].

With immunotherapy, as with so many of our medical interventions, the path from original discovery or observation to effective treatment is long, circuitous, and densely populated. In fact, a fascinating recent study showed that the development of another form of cancer immunotherapy, so-called “checkpoint inhibitors,” arose from the work of some 7,067 scientists, toiling over the course of a century [5]. Immunotherapy is indeed the achievement of many minds. At the same time, the commitment and passion of researchers such as June and Rosenberg—and James Allison of the University of Texas MD Anderson Cancer Center, Houston, for checkpoint inhibitors—have been essential to pushing past obstacles and skeptics, and bringing us to this remarkable moment in medicine’s history.

As it turns out, the very same year that June and his colleagues successfully treated Emily, they partnered with the Swiss-based pharmaceutical company Novartis to develop commercially a version of CAR-T therapy, now called Kymriah™ (tisagenlecleucel). Further trials showed the treatment to be extremely promising. In July, an FDA advisory committee met to consider whether to recommend approval of the therapy. With his daughter by his side, Emily’s father, Thomas, gave impassioned and eloquent testimony on CAR-T’s behalf. In the end, the committee voted unanimously to recommend that the FDA approve the treatment. And, today,  the FDA followed that recommendation and gave formal approval.

Many questions must be addressed before we can herald immunotherapeutic approaches to cancer an unqualified success. There are still too many severe reactions, too many non-responses or relapses, and, potentially, a very high price tag for their widespread use, which will be truly challenging to scale up. But we’re off to a promising start.

Emily keeps smiling. Her smile gives me hope. Seeing her grow from a young girl struggling with a frightening disease into a poised young woman who looks forward to starting the 7th grade, but still spends time to be an ambassador for immunotherapy, is one of the greatest joys I’ve had as NIH Director.

I’m eager to see where our immunotherapy researchers take us next!

Novartis receives first ever FDA approval for a CAR-T cell therapy, Kymriah(TM) (CTL019), for children and young adults with B-cell ALL that is refractory or has relapsed at least twice, Novartis press release, Aug. 30, 2017.