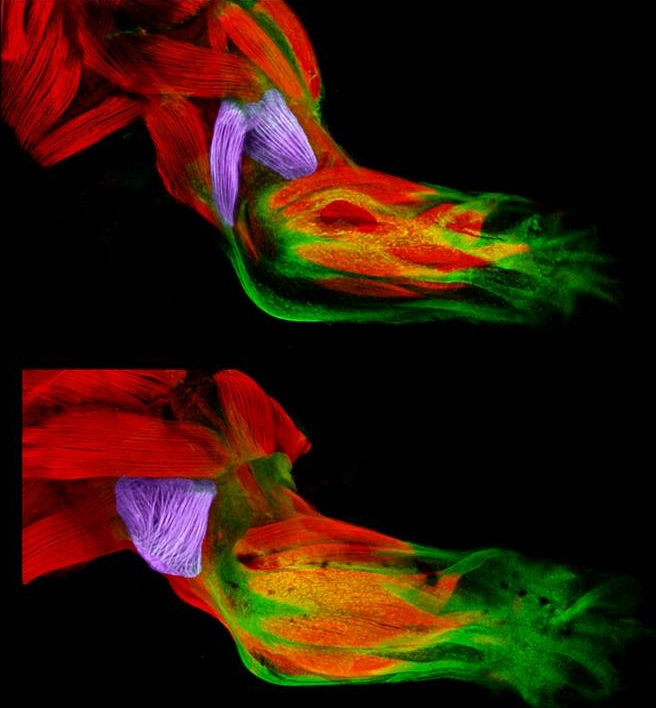 In each strain, you see the lateral triceps and brachialis muscles (purple), other types of muscle (red) and tendons (green). However, in the healthy mouse, the lateral triceps and brachialis muscles are distinct, which gives the forelimb its flexibility; while in the mutant mouse, the two muscles are fused and indistinct, limiting the forelimb’s function.

The mice with the abnormal lateral triceps and brachialis have a mutation in a gene called Tbx3, which codes for a transcription factor that switches other genes off and on. If you follow this blog, you know that a lot of exciting research is currently focused on transcription factors, including how precise combinations of transcription factors can turn skin cells into blood stem cells or be used to make neurons.

The work of Kardon and her colleagues suggest that transcription factors might also play a key role in the development of specific types of muscle cells. That could be a major lead in efforts to regenerate muscle after injury, and treat or prevent inherited diseases involving limb muscles.

In fact, the Tbx3 gene is already known to be mutated in humans with a rare condition called ulnar-mammary syndrome (UMS). People with UMS are born with various developmental anomalies, most notably, a range of serious limb abnormalities affecting the forearms. In 1999, Michael Bamshad, a researcher now at the University of Washington, Seattle, published a paper that characterized the physical effects of Tbx3 mutations, including a description of skeletal abnormalities in the arms of a male born with UMS [2].

At Kardon’s urging, Bamshad contacted this UMS patient, who agreed to visit NIH’s Clinical Center in Bethesda, MD, for additional tests with Carsten Bönnemann of the National Institute of Neurological Disorders and Stroke. Because of anatomical differences between mice and humans, Bönnemann and his colleagues didn’t think the patient would have malformed muscles. However, the patient was found to be missing the lateral triceps in his right arm. The finding serves as an excellent example of mouse genetics informing studies of human disease and development.

Interestingly, Kardon and colleagues group found Tbx3 isn’t switched on within the muscle cells themselves. The crucial signal, instead, appears to be sent out during an early stage of human development, with Tbx3 being expressed in the connective tissue surrounding the lateral triceps and brachialis muscles. This finding suggests that connective tissue may play a vital role by laying down a scaffold that specifies muscle patterns within the human body.

By the way, there’s one more NIH connection to this work. Kardon’s team produced this image, featured in the University of Utah’s 2016 Research as Art competition, using a free software program, called FluoRender, that was developed by another NIH-supported team at the University of Utah. FluoRender enables researchers to take a series of 2D photos from a scanning confocal microscope and turn them into amazingly informative 3D imagery.

Research as Art (University of Utah)