There’s been tremendous excitement in the cancer community recently about the life-saving potential of immunotherapy. In this treatment strategy, a patient’s own immune system is enlisted to control and, in some cases, even cure the cancer. But despite many dramatic stories of response, immunotherapy doesn’t work for everyone. A major challenge has been figuring out how to identify with greater precision which patients are most likely to benefit from this new approach, and how to use that information to develop strategies to expand immunotherapy’s potential.

A couple of years ago, I wrote about early progress on this front, highlighting a small study in which NIH-funded researchers were able to predict which people with colorectal and other types of cancer would benefit from an immunotherapy drug called pembrolizumab (Keytruda®). The key seemed to be that tumors with defects affecting the “mismatch repair” pathway were more likely to benefit. Mismatch repair is involved in fixing small glitches that occur when DNA is copied during cell division. If a tumor is deficient in mismatch repair, it contains many more DNA mutations than other tumors—and, as it turns out, immunotherapy appears to be most effective against tumors with many mutations.

Now, I’m pleased to report more promising news from that clinical trial of pembrolizumab, which was expanded to include 86 adults with 12 different types of mismatch repair-deficient cancers that had been previously treated with at least one type of standard therapy [1]. After a year of biweekly infusions, more than half of the patients had their tumors shrink by at least 30 percent—and, even better, 18 had their tumors completely disappear!

The results are so encouraging that the Food and Drug Administration (FDA) recently approved the expanded use of pembrolizumab for people with any solid tumor that is deficient in mismatch repair. This marks the first cancer treatment ever approved to treat adult and pediatric tumors based on a specific genetic feature, not where the tumor arises in the body [2]. It also marks another important milestone in NIH’s ongoing effort to bring greater precision to cancer care.

Pembrolizumab is a humanized monoclonal antibody, a molecule produced in the lab to stimulate the immune system to attack a target. In this case, the target is a protein on the surface of certain immune cells called PD-1. When an immune cell uses PD-1 to bind a protein called PD-L1 on the surface of another cell, it stays in the “off” position and won’t attack the cell. That’s why some cancers load up on PD-L1 to evade the immune system. But pembrolizumab blocks PD-1 binding, keeping the immune system active in the hunt to recognize and kill cancer cells. Common side effects were usually manageable, and included fatigue, skin inflammation, joint pain, and thyroid dysfunction.

Many patients are continuing to do well in the ongoing study, which was led by Dung Le at the Johns Hopkins Bloomberg-Kimmel Institute for Cancer Immunotherapy, Baltimore, and Luis Diaz, Jr., who recently moved from Johns Hopkins to Memorial Sloan Kettering Cancer Center, New York. Researchers do not have final results for either median or progression-free survival, but interim estimates suggest an overall survival of 76 percent after one year of treatment and 64 percent at two years. That’s pretty remarkable if you consider that, without immunotherapy, most participants wouldn’t have been expected to live for more than six months.

As of the end of 2016, the data cutoff for this latest report, 18 people had stopped immunotherapy after two years according to protocol. Eleven had a complete response with no evidence of cancer recurrence after more than 8 months. Another seven people, despite having some residual disease, were taken off the drug at two years or earlier because of side effects. The good news is their cancers have shown no sign of progressing. 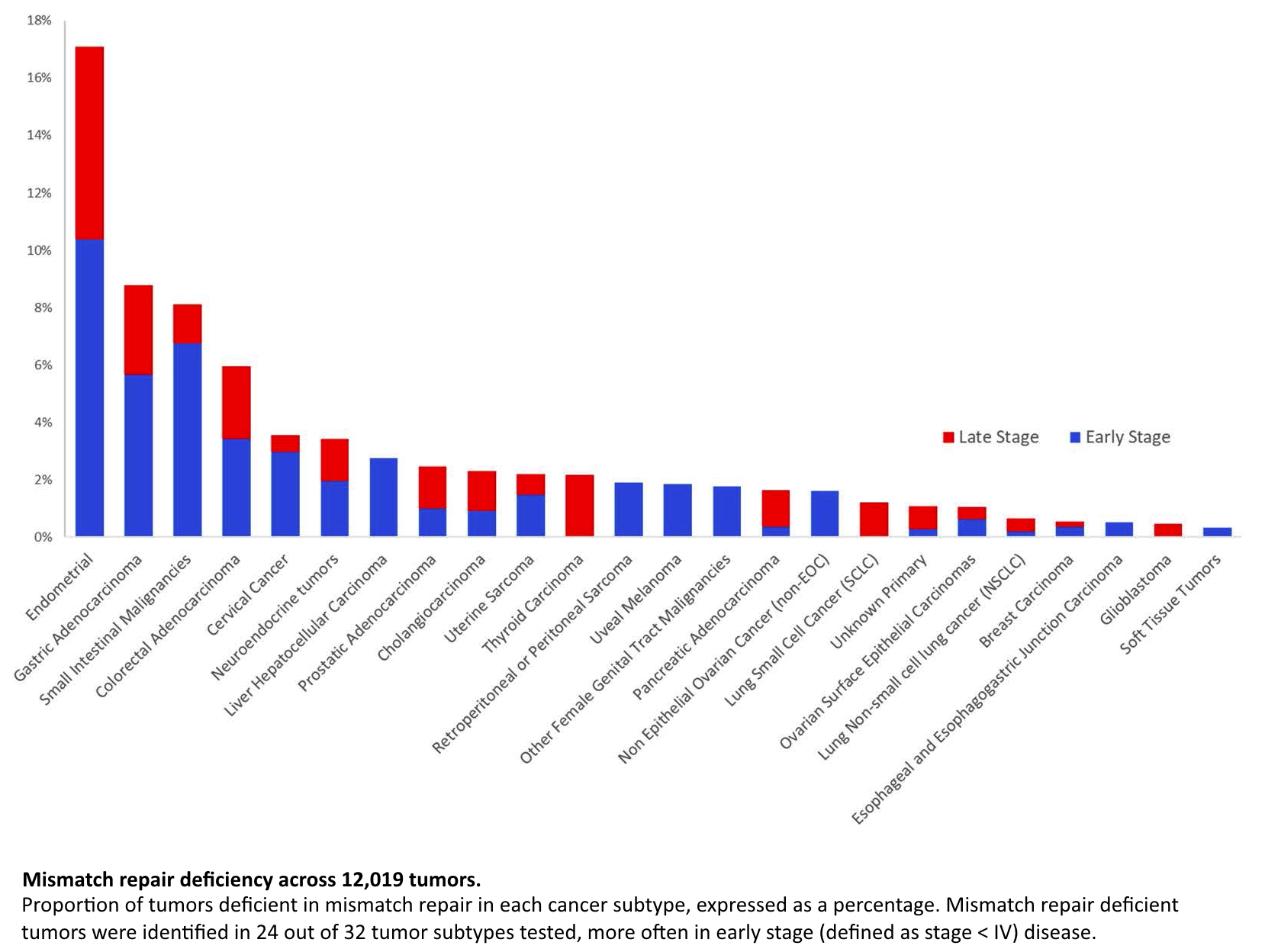 Given the latest findings, together with the recent FDA approval of pembrolizumab, immunotherapy can now begin to benefit many more cancer patients who otherwise lack treatment options. To estimate just how many, the researchers evaluated tumors from more than 12,000 people with 32 different cancer types for problems in mismatch repair. They determined that mismatch repair defects occur in nearly 5 percent of patients with 11 types of cancer, including cancers of the stomach, cervix, prostate, liver, and neuroendocrine system. That translates to about 60,000 people per year in the United States alone.

Le says it could now be beneficial for doctors to test patients with advanced cancers early for their mismatch repair status, allowing for more informed treatment planning. That certainly makes good sense for patients and for health care costs. Pembrolizumab and other immunotherapy drugs can cost $100,000 or more per year; tests for defects in mismatch repair can be had for as little as $300.

There’s no doubt this is an important “first” for patients and for the cancer community. The hope is that it heralds a new phase for precision cancer care, and we can look forward to many more wins like this one.

[2] FDA approves first cancer treatment for any solid tumor with a specific genetic feature. Food and Drug Administration. 23 May 2017.