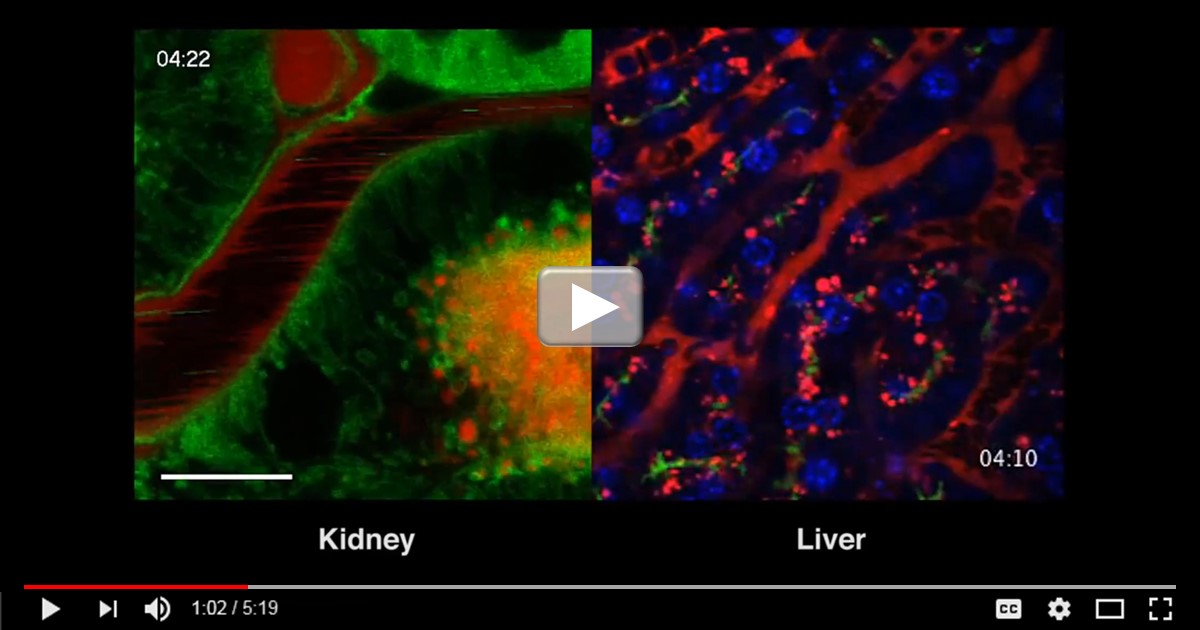 Cell biologists now possess an unprecedented set of laboratory tools to look inside living cells and study their inner workings. Many of these tools have only recently appeared, while others have deeper historical roots. Combining the best of the old with the best of the new, researchers now have the power to explore the biological underpinnings of life in ways never seen before.

That’s the story of this video from the lab of Roberto Weigert, an intramural researcher with NIH’s National Cancer Institute and National Institute of Dental and Craniofacial Research. Weigert is a cell biologist who specializes in intravital microscopy (IVM), an extremely high-resolution imaging tool that traces its origins to the 19th century. What’s unique about IVM is its phenomenal resolution can be used in living animals, allowing researchers to watch biological processes unfold in organs under real physiological conditions and in real time.

However, the challenge has been that IVM is so high resolution that the most seemingly trivial movements, such as the animal’s breathing or even a slight twitch, have a jarring visual effect that’s somewhat like watching a series of major earthquakes. Weigert and his collaborators solved this problem by learning to better stabilize an organ of interest and minimize the motion artifacts. After accomplishing that, his group went on to maximize the optics of IVM, cracking the subcellular barrier about eight years ago to visualize the trafficking of molecules within the cell in nearly real time. He calls this high-resolution IVM approach Intravital SubCellular Microscopy (iSMIC).

That’s where “new” enters the picture. New live cell-imaging probes, such as green fluorescent protein, have allowed Weigert and his colleagues to tag molecules of interest with high specificity and then trace their subcellular movements in a living animal. Or by using gene editing tools, such as CRISPR/Cas9, they can generate animal models with fluorescently tagged proteins even faster to study the effects of genetic alterations, all with tremendous specificity and clarity seen in this video.

The resolution of IVM is also getting even better. Six years ago, Weigert’s cellular movies were shot in two dimensions. Now, all of his movies are shot in 4D (three dimensions over time) using a special image-capture system, called a resonance scanner, that averages 30 frames per second. New resonance scanners have arrived on the IVM market that can go up to 430 frames per second, producing an enormous volume of information about the cell and its inner workings.

So, enjoy this interesting video, one of the winners recently featured in the American Society for Cell Biology’s 2016 Celldance video series. Weigert says he and his team are still getting the hang of filming at a capacity of 430-frames per second.  But, when they do, biology students and science enthusiasts alike will be in for some more amazing viewing!