The far-ranging discussion between Ma and myself began with a brief look at his extraordinary career. When I asked what qualities lead to musical greatness, he replied: “It’s very, very simple. Learn what you need to learn by heart before you are 20. It gets harder after that.”

Born in Paris in 1955, Ma started playing the cello at age 4. Soon after, he and his family immigrated to America, where he spent most of his formative years in New York City. His musical talents and curiosity for communicating with audiences in novel ways have been recognized with numerous awards. These include the National Medal of the Arts, the Presidential Medal of Freedom and Kennedy Center Honors. Ma’s discography of more than 100 albums includes 18 Grammy Award Winners. 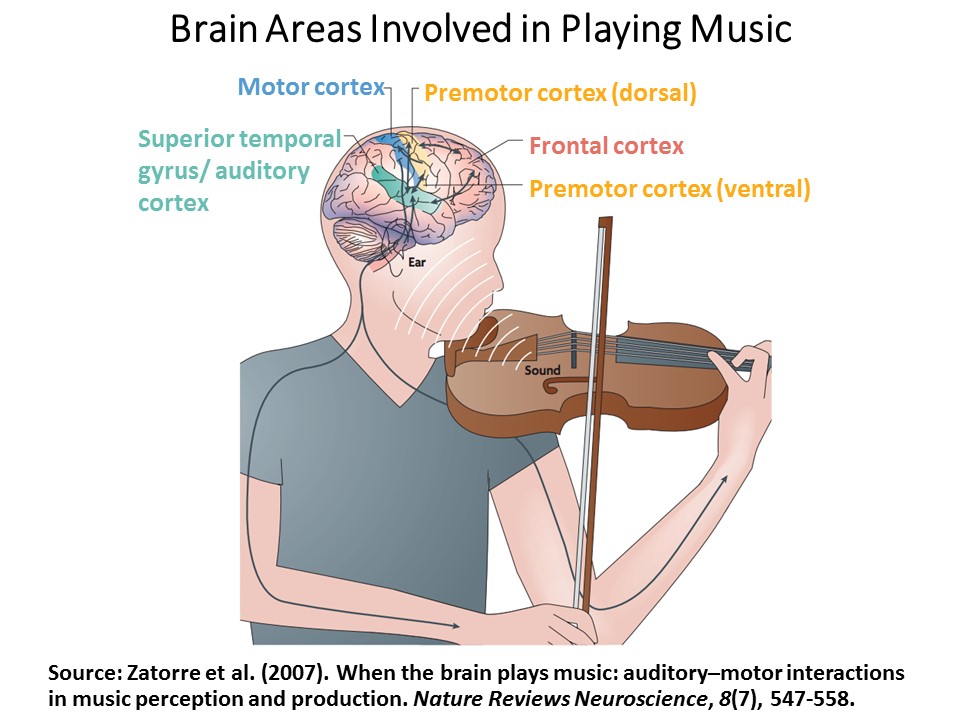 Before the rapt audience at the NIH Clinical Center’s Masur Auditorium, Ma demonstrated various ways to interpret the notes and dynamics of Bach, opening the door to the fascinating topic of the neuroscience of music. As you can see in the image to your right, when a person plays a violin or other musical instrument, a variety of areas throughout the brain are activated. [1] Another recent study suggests that the human brain possesses its own “music room” in the cerebral cortex, composed of populations of neural cells that are selectively dedicated to processing the sounds of music, as opposed to sounds of speech. [2] What’s more, neuroscientists have found that certain brain cells release dopamine, a neurotransmitter that helps control reward and pleasure, both before and during the times that people listen to musical passages with the power to give them “the chills.” [3]

Another topic raised by Ma was how the open exchange of information has served to accelerate progress not only in biomedical research, but in the making of world-class string instruments. We even touched upon the question of why music exists: what evolutionary advantage might it have provided to Homo sapiens as a species? Perhaps it was a way for social groups to join together around a common purpose and improve their chances of survival? Alas, we could reach no firm conclusions on such a complicated topic in the short time allotted. Maybe we can pick up that conversation—and pluck a few more strings on our instruments—at another time!

High-dose buprenorphine therapy is a safe & well-tolerated option (in ER dept. settings) for those w/ #opioid use d… https://t.co/daCasefNl1 7 hours ago

A new leap in structural biology fueled by #artificialintelligence is potentially groundbreaking news for the futur… https://t.co/ZZqJoMN5st 1 day ago