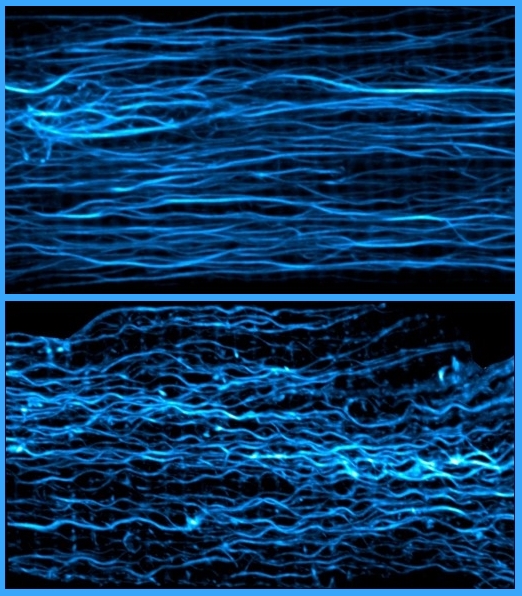 Microtubules are dynamic filaments that play an important role in the structural support and movement of cells along with shuttling their intracellular cargo. While some evidence had implicated increased numbers of microtubules in heart disease, their role in the contraction of heart muscles had been largely unexplored. In part, that’s because it’s quite challenging to capture all the moving parts in a living heart cell. To see what’s really happening inside such a cell requires incredibly detailed spatial resolution and the ability to capture events taking place at high speed. Consider that a complete contraction of the heart muscle takes place in about a tenth of a second!

In the new study, researchers—led by Benjamin Prosser of the University of Pennsylvania Perelman School of Medicine, Philadelphia—took advantage of an advanced form of high-resolution, high-speed microscopy. It allowed them to zero in on the microtubules inside of working heart cells isolated from rodents.

What Prosser and his colleagues saw initially surprised them. They discovered an abundance of microtubules filling the gaps between the rounded threads that make up healthy heart muscle. While microtubules are often described as rigid rods, they found that these structures had an ability to buckle under pressure without breaking.

The researchers went on to discover that the degree to which a particular microtubule buckles with a contraction depends on chemical modifications to its structure and specifically on the addition or subtraction of a chemical group known as tyrosine. When tyrosine is added, microtubules buckled less, simply sliding past one another during contraction. When tyrosine was removed, microtubules buckled more, making the contraction of the heart cell more difficult. These changes were related to the degree of attachment between microtubules and other parts of the contracting cell structure.

To find out whether removing too much tyrosine might be related to stiffened heart tissue in diseased hearts, the researchers compared heart tissue from healthy organ donors and those from transplant patients with varying degrees of heart disease. As in previous studies, they found that the diseased hearts had an excess of microtubules, especially the kind with reduced tyrosine that would be more firmly attached and prone to buckling.

Further study in patients with hypertrophic cardiomyopathy (thickened heart muscle) showed that the level of tyrosine associated with microtubules in the heart corresponded to the level of impairment in cardiac function. While it has yet to be fully demonstrated, Prosser and his colleagues suspect that microtubules in healthy heart muscle must strike a balance between too much resistance and not enough.

The findings suggest that drugs designed to alter tyrosine levels in microtubules might hold promise in the treatment of heart disease. In fact, the researchers have preliminary evidence in heart cells that such drugs might work to strengthen heart function. As they learn more about the factors that influence this process in human heart muscle, they hope to find new ways to target microtubules even more precisely.

What Is the Heart? (National Heart, Lung, and Blood Institute/NIH)