Creative Minds: Opening a Window on Alzheimer’s Before It Strikes

While attending college in her native Colombia, Yakeel T. Quiroz joined the Grupo de Neurociencias de Antioquia. This dedicated group of Colombian researchers, healthcare workers, and students has worked for many years with a large extended family in the northwestern district of Antioquia that is truly unique. About half of the more than 5,000 family members inherit a gene mutation that predisposes them to what is known locally as “la bobera,” or “the foolishness,” a devastating form of early-onset Alzheimer’s disease. Those born with the mutation are cognitively healthy through their 20s, become forgetful in their 30s, and descend into full-blown Alzheimer’s disease by their mid-to- late 40s. Making matters worse, multiple family members sometimes are in different stages of dementia at the same time, including the caregiver attempting to hold the household together.

Quiroz, now a researcher at Massachusetts General Hospital in Boston, vowed never to forget these families. She hasn’t, working hard to understand early-onset Alzheimer’s disease and helping to establish the Forget Me Not Initiative to raise money for affected families. With an NIH Director’s Early Independence Award, Quiroz also recently launched her own lab to pursue an even broader scientific opportunity: discover subtle pre-symptomatic changes in the brain years before they give rise to detectable Alzheimer’s. What she learns will have application not only to detect and possibly treat early-onset Alzheimer’s in Colombia but also to understand the late-onset forms of the dementia that affect an estimated 35.6 million people worldwide. 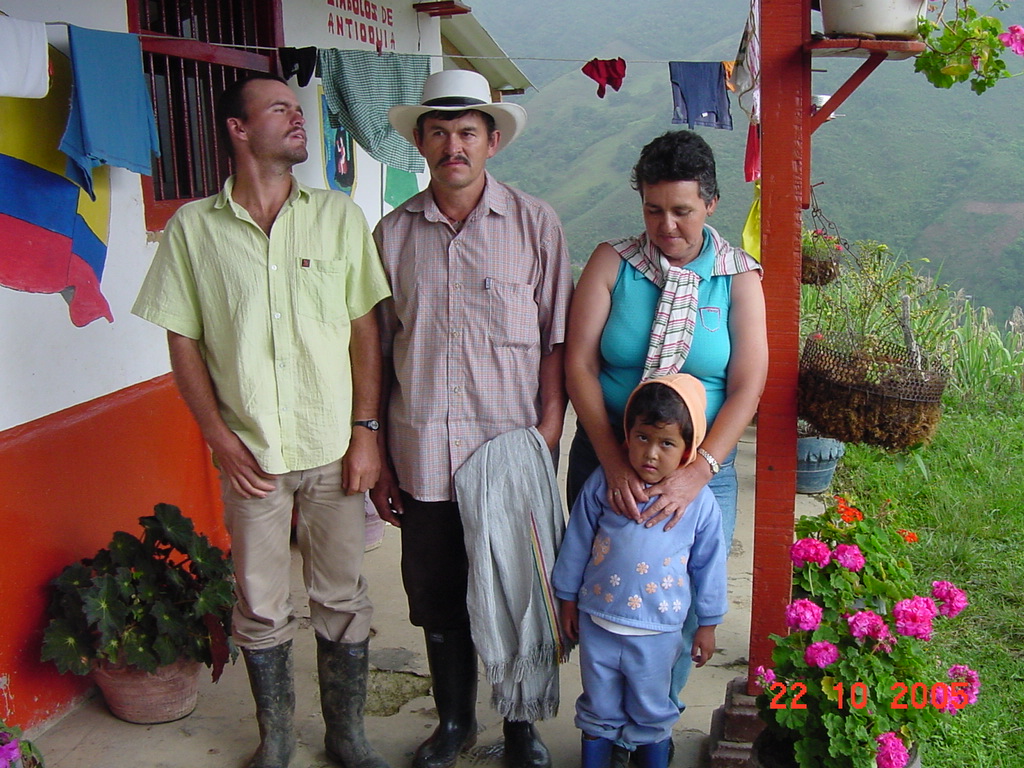 Caption: One of many Colombian families who have a genetic mutation that leads them to develop Alzheimer’s disease.
Credit: Forget Me Not Initiative/Grupo de Neurociencias de Antioquia

The Colombian form of early-onset Alzheimer’s disease arises from a single nucleotide substitution (an “A” gets inserted instead of the usual “G”) in the presenilin 1 gene (PSEN1), which encodes a neural-membrane protein. The alteration, called the Paisa mutation, results in early accumulation of amyloid in the brain, and appears to date back to the Spanish Conquistadors who settled this mountainous region of Colombia in the 16th century.  It has been passed from generation to generation among 26 extended families ever since, with devastating effects [1].

What’s also unique about these families is they represent the world’s largest group of people with a known predisposition to early onset Alzheimer’s. Having so many people in one place that will develop the disease, Quiroz and her colleagues can track the neurological function of young healthy family members over time using memory tests, brain imaging technologies, and fluid biomarkers. This gives them an unprecedented window into detecting the first subtle neurological changes related to the dementia several years before it becomes clinically apparent.

Already, Quiroz has published several interesting findings on this front. Using magnetic resonance imaging, Quiroz and her colleagues measured the thickness of brain regions known-to-be ravaged in Alzheimer’s patients. The participants, who averaged 38 years old, all appeared perfectly normal. But when Quiroz looked at MRI scans of their brains, she could see that those who carried the genetic predisposition to Alzheimer’s already had a visibly thinning cortex. The finding confirmed that the brain begins to atrophy at least six years before clinical symptoms emerge [2]. To Quiroz, this suggests that such imaging might be one way to identify individuals who are at risk for the sporadic form of the disease.

In another study, Quiroz and her colleagues studied the activity of the hippocampus, a seahorse-shaped brain structure that is vital for memory and spatial navigation. Using functional MRI, she monitored the activity of the hippocampus during a face-name learning task in 20 carriers and 19 controls. She saw that in those who carried the mutation, the hippocampus was abnormally hyperactive during periods when it should have been quiet [3]. This suggests that a person with the PSEN1 mutation must work his or her hippocampus harder than others the same age to perform a simple mental task like putting a name to a face.

While Quiroz searches for earlier clues of developing dementia, members of the 26 Colombian families are participating in the first prevention trial for Alzheimer’s disease. The five-year study—supported by NIH; Banner Alzheimer’s Institute, Phoenix; Colombia’s University of Antioquia; and Genentech, South San Francisco—involves younger and cognitively healthy people with the Paisa mutation to determine if an antibody treatment called crenezumab can clear away abnormal amounts of amyloid protein in their brains and prevent decline of their cognitive function. The trial, which also will include some U.S. participants, is one of the cornerstones of the international Alzheimer’s Prevention Initiative, formed to accelerate the evaluation of promising but unproven prevention therapies. It will be profoundly important to find out what they discover.

Forget Me Not Initiative (Non-profit organization founded by Yakeel Quiroz)