Today, we had the great honor of welcoming President Barack Obama to the campus of the National Institutes of Health (NIH) in Bethesda, MD—to see first-hand the progress that biomedical research is making against Ebola virus disease. The President toured the NIH Vaccine Research Center, and met with scientists who are working hard to develop ways to combat this deadly virus that continues to devastate West Africa. And, in a speech before a packed auditorium at the NIH Clinical Center, the President praised the contributions of NIH staff. He also emphasized the need for emergency Congressional authorization of resources to ensure that our nation’s research and public health efforts against Ebola will lead as quickly as possible to an end to this devastating outbreak.

The President heard about many encouraging advances against Ebola during his visit here, and I’d like to share a couple with you now. I think these examples—one about a vaccine and one about a treatment—speak to the extraordinary ways in which scientists from different fields, disciplines, and organizations are pulling together to tackle this urgent disease threat.

The first piece of good news relates to efforts to prevent Ebola virus disease: we recently received promising, early results from the initial clinical trial of a candidate Ebola vaccine, conducted here at the NIH Clinical Center. In a study published last week in The New England Journal of Medicine, researchers reported that this Phase I trial established that the vaccine was well tolerated—and that it produced measurable immune responses—in all 20 healthy adult volunteers who received it. Based on these preliminary results, we plan to keep moving the vaccine towards the larger, randomized clinical studies necessary to determine whether it is effective in preventing Ebola infection.

The vaccine used in this trial was co-developed by researchers at NIH’s National Institute of Allergy and Infectious Diseases (NIAID) and the British-based pharmaceutical firm, GlaxoSmithKline (GSK). It must be emphasized that this candidate vaccine is not made from the whole Ebola virus and, thus, cannot cause Ebola virus disease. Rather, it contains snippets of genetic material from two major strains of the Ebola virus, Sudan and Zaire. This non-infectious genetic material is delivered by a carrier virus that causes the common cold in chimpanzees, but does not make humans sick.

Let me double back and tell you a bit more about the study. All 20 of the volunteers were between the ages of 18 and 50. Half received an intramuscular injection of vaccine at a lower dose, and the rest received the same vaccine at a higher dose. At two and four weeks after vaccination, the researchers drew blood from the volunteers to determine if anti-Ebola antibodies were generated. All 20 volunteers had generated potentially protective antibodies within four weeks of receiving the vaccine, but the antibody levels were higher in those who received the higher dose vaccine. Another important observation is that the NIAID/GSK vaccine induced memory immune cells, called T-cells, in many of the volunteers, including the production of CD8 T cells, which may be a key part of immune protection against the Ebola virus.

The second area of research progress involves a potential treatment for Ebola virus disease, specifically, the investigational drug ZMapp. This drug, which NIAID has supported and collaborated with Mapp Biopharmaceutical, Inc., San Diego, is a cocktail of three highly purified monoclonal antibodies, or protective immune proteins, known to target the virus.

ZMapp was in the news last summer when it was administered on a compassionate basis to several individuals who were seriously ill with Ebola virus disease. While most (but not all) of those who received ZMapp survived, we do not know if the drug played any role in these positive outcomes. To gather more solid scientific evidence, NIH has a strong interest in conducting clinical studies to better evaluate the drug’s safety and efficacy.

There also is an important basic research question: Where exactly do ZMapp’s three monoclonal antibodies bind to the Ebola virus and possibly neutralize it? Researchers at The Scripps Research Institute in La Jolla, CA say they now have the answer. Using a high-resolution imaging technique, called single-particle electron microscopy, the researchers recently mapped in exquisite 3-D detail the binding of the ZMapp antibodies to the Ebola virus. 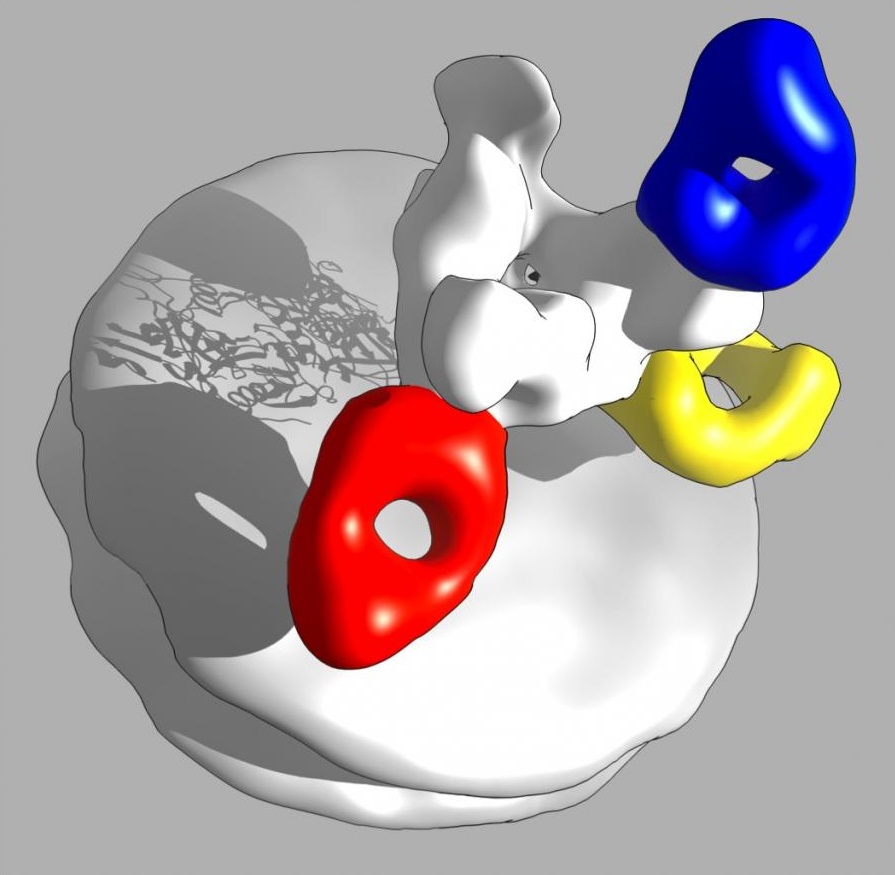 Caption: 3-D picture of how the antibodies in the experimental drug ZMapp bind to Ebola virus.
Credit: Ward lab, The Scripps Research Institute

In the image above, the surface of one part of the Ebola virus appears as a white disc, while the white tree-like appendage depicts the spike protein that enables the virus to fuse with human cells and insert its genetic material.

The researchers discovered that two of the antibodies in ZMapp (indicated by red and yellow) disrupt the fusion process, neutralizing the virus and preventing it from attaching to the cell. Because these two antibodies do roughly the same thing, the researchers speculated that it might be possible to eliminate one from the ZMapp cocktail, which may make the drug less expensive and easier to manufacture. Meanwhile, ZMapp’s third antibody (blue) serves as a beacon for the immune system. Although this antibody can’t neutralize the virus, it binds to the spike protein and alerts the immune system that the virus has invaded the body and must be destroyed.

Andrew Ward, one of the leaders of the NIH-supported Scripps team, says the findings provide a clearer scientific rationale for why ZMapp might be effective in combating the virus. Of course, future clinical studies will be needed to determine whether that’s indeed the case. But we’re clearly off to a solid start.

So far, Ward and his colleagues at Scripps have collaborated with colleagues at Mapp Biopharmaceutical to image more than 20 antibodies to determine if it might be possible to develop a more effective cocktail than ZMapp. The Scripps team is also planning to image antibodies in the bloodstreams of people who’ve survived Ebola without taking ZMapp or other drugs, to learn more about how their immune systems defeated the virus.

From a broader perspective, the findings suggest that the Ebola virus has at least two exploitable points of structural vulnerability. These viral “soft spots” will help to inform future efforts at drug and vaccine development. For example, vaccine researchers might want to target the spike protein to block the fusion process, while researchers trying to come up with new therapies might follow the lead of the blue antibody and look for molecules that alert the immune system to destroy infected cells.

Scientists also can use these soft spots to track the evolution of the Ebola virus, something that I wrote about in an earlier post. Because the Ebola virus mutates constantly, we need to make sure that the proteins targeted by ZMapp and other potential therapies and vaccines haven’t mutated, rendering the treatment and prevention strategies less than effective.

Whether on the basis of history, archaeology, philosophy, theology, or genomics, we humans are all one family. So when one part of the family is afflicted, we all are. Whether disease is happening in West Africa or West L.A., we at NIH will work tirelessly to develop the means to prevent and treat it. The President’s visit provided a wonderful encouragement to all who labor here.

“A Test of Our Character as a Nation”: President Obama on What We Need in the Fight Against Ebola. Tanya Somanader. The White House Blog, 02 December 2014.