For some people, the smell of Mom’s home-baked pie, the sight of an ice cream truck, or the sound of sizzling French fries can trigger a feeding frenzy. But others find it much easier to resist such temptations. What’s the explanation?

You might think it’s sheer willpower. But a recent study in the journal Molecular Psychiatry suggests the answer to what fuels susceptibility to food cues may be far more complex, related to subtle differences in brain chemistry [1].

Focusing on the brain-signaling chemical dopamine, researchers at the NIH Clinical Center here in Bethesda, MD, used Positron Emission Tomography (PET) to scan the brains of 43 men and women with varying amounts of body fat. The PET scans showed that, compared to their leaner counterparts, obese individuals had more dopamine-triggered signaling activity in the habit-forming region of the brain, called the dorsolateral striatum. Conversely, the obese group had less dopamine signaling in the ventromedial striatum, an area of the brain that controls reward and motivation, than the slimmer group. 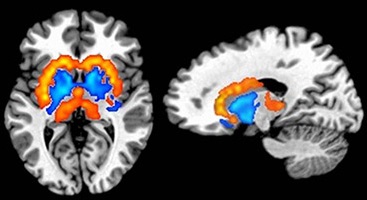 Caption: In obese people, the habit-forming region of the brain is highly active (orange), while the area that controls reward is less active (blue).
Credit: Juen Guo, Ph.D. and W. Kyle Simmons, Ph.D.

According to researchers, these patterns of dopamine activity could potentially make obese people more compelled to eat—and eat too much—in response to food-related cues in the environment. Indeed, when obese participants responded to the researchers’ detailed questionnaire, they reported a greater tendency than other participants to overeat when they encountered food triggers.

The team’s leader, Kevin D. Hall, who is an intramural investigator at the National Institute of Diabetes and Digestive and Kidney Diseases (NIDDK), said it remains to be determined whether the brain chemistry differences detected by his group actually contribute to obesity or are the result of it. But Hall speculates that elevated dopamine signaling in the dorsolateral striatum may prompt habitual eating in response to sensory cues, while, at the same time, reduced signaling in the ventromedial striatum may make the food consumed less rewarding. This situation could cause obese individuals to eat larger or more frequent portions as their brains drive them to seek out a reward response.

To learn more about how our brain chemistry may influence our weight, Hall’s team plans to examine dopamine activity and eating behavior in people over time as they change their diets, physical activity, and even levels of body fat. The ultimate goal is to generate knowledge that can be used to advance efforts to prevent and treat obesity, which is a leading risk factor for heart disease, type 2 diabetes, certain types of cancer, osteoarthritis, and many other serious health conditions.