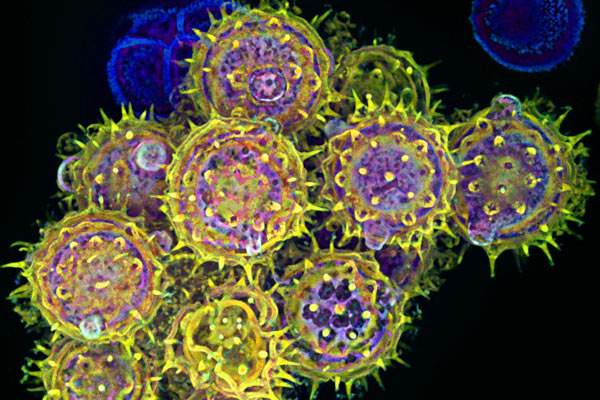 First, Cukierman needed to find something to image. She settled upon pollen grains the microscope manufacturer sent for the calibration process. Then, using three different wavelengths of laser light, she and her 10-year old son, Gil, created three series of black-and-white images of the pollen grains; each series represented progressive slices taken at varying focal planes. Using computer software, Cukierman showed Gil how to stack each series of images to create a 3D black-and-white photo. Her 7-year old son, Amit, added the final flourish by choosing one color for each 3D image that, when overlaid, would make it pop.

Over the years, the Cukierman family has enjoyed seeing their pollen image win accolades at various venues showcasing the intersection of science and art, including Nikon’s Small World, Olympus BioScapes, and, most recently, in NIH’s Life:Magnified exhibit. Not bad for a Saturday art project!